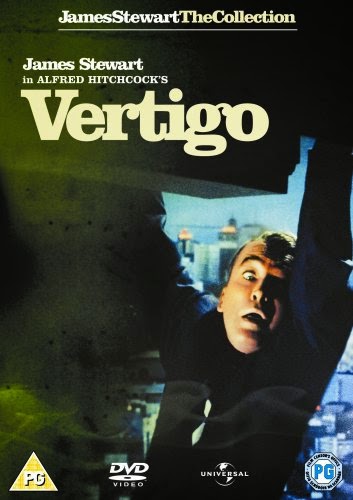 Steve Taylor-Bryant tries not to get dizzy watching Hitchcock's Vertigo...

Scottie Ferguson is a Detective forced into retirement after his fear of heights led, in some part, to the death of a colleague during a roof top chase with a criminal. Shortly after his retirement, a friend asks Scottie to watch over his wealthy young wife whilst he is out of town. Scottie agrees and so begins an fascination with Madeline, herself obsessed with the suicide a hundred years before of her Great-Grandmother Carlotta Valdes. Fascination leads to obsession and, when Madeline dies, Scottie spots Judy and moulds her into a Madeline replacement. But it is not just Scottie's obsession that is wrong, there is a murderous twist...


Sounds like an okay film doesn't it? When it was released in 1958 it wasn't liked. Deemed too much of a slow burner by audiences and critics alike, it was not really appreciated until it had gone. When Alfred Hitchcock regained the rights to some of his films he took it out of circulation. Whilst it was away from the screen it gained an almost cult like status and upon its re-release it was consumed by fans and studied relentlessly as a piece of film making genius, leading to Sound and Vision making it the second best film ever made behind 1941's Citizen Kane.

As a story it works on many levels. It is a murder mystery, a whodunnit, but it is this obsession aspect that is probably the best part of the film. Madness in movies is always welcome in my household and you don't just have Scottie's obsession on screen but Alfred Hitchcock's own obsession with a type of a woman bearing out in front of your eyes. It is unsettling in places and haunting in others, in a way not normally found in a conventional mystery film. The twist in the plot also occurs before the end, another reason for its vilification at the time of release, but knowing what is going on before the main character does is an incredible piece of writing and, even now, it edges me towards the screen as I become more enthralled in the plot.

James Stewart plays Scottie Ferguson with a damage to him that not many stars could pull off. Whilst Alfred Hitchcock was worried that this fourth and final team up with Stewart saw the actor as too old, in my opinion it is certainly the best performance by Stewart, not just in Hitchcock movies but any movie. Kim Novak was a late selection to the cast replacing original pick Vera Miles, who went on to be in Psycho, who had fallen pregnant just before production. Novak is superb, playing two versions of the same woman with all the skill of any of her peers, and is as talented as she is beautiful.

Hitchcock took the French novel D'Entre Les Mortes moved it from a Parisian setting to put it in San Francisco, not the best place for a vertigo sufferer, and the city backdrop stars as much as the actors, lending a weight and believability to the script. The script itself was quite a journey. Playwrights, Hitchcock himself and Alec Coppel all had a hand it transferring the book to the screen before Samuel Taylor's draft was selected for production.

Bernard Herrmann again scores a Hitchcock film, whilst Saul Bass developed the intro based on the effects work, new at the time, of John Whitney. The psychedelic swirling spirals are second nature to film fans now but in the 1950's this was a radical approach and added an element of mad curiosity to the film.

Hitchcock made many films. I love most of them. I rewatch most of them. But none touch Vertigo for creativity, twists, and great writing.