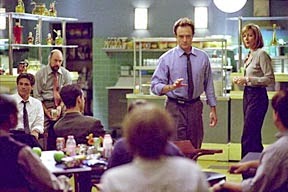 Steve Taylor-Bryant remembers Isaac and Ishmael, the one off episode of The West Wing...


It's no secret that I am huge fan of Aaron Sorkin. Three of my all-time favourite shows are from the mighty pen of Mr Sorkin, The Newsroom, Studio 60 on the Sunset Strip, and my introduction to his work, The West Wing. The problem with shows that reflect real emotions and events within a timeline is that the structure occasionally has to be broken due to outside forces. The world was shocked on September the 11th 2001 when the terrorist atrocities occurred in New York and Virginia. Planes used as weapons and a horrific loss of life led to The West Wing season premiere of the third run being changed with a hastily made episode to deal with terrorism. It doesn't fit in to any timeline the show-runners had planned, and the cast all take the time at the start of show to explain why and to try and raise money for the disaster funds. When a world shock occurs it is very easy to apportion blame and seek revenge in any medium. Whilst governments across the globe prepared for war Aaron Sorkin prepared for peace. He wrote a delicate episode that showed that not all Arab, or Middle Eastern people were terrorists and what could happen when you think they are.

That episode was Isaac and Ishmael.

Josh and Donna are talking to a group of students at The White House when an alert puts the building into a lockdown. The group move to the staff canteen whilst the alert is investigated and a discussion starts on terrorism. Meanwhile, another White House employee named Rakim Ali is taken in for questioning; someone named Yaarun Nabi is responsible for the attacks and Rakim Ali is one of his known aliases. Leo gets very irate and helps with the interrogation.

"Islamic extremist is to Islamic as _________ is to Christianity." Josh writes on the board. One by one the other members of The West Wing team come down looking for apples and peanut butter and each in turn take their chance to talk to the impressionable group of youths. Sam and Toby explain about the way the word 'assassin' was invented and an 11th Century group of terrorists. CJ talks about how spying and phone tapping might help to make people feel safer, Charlie explains about being united as a group and showing comparisons in Washington D.C gang life. Then is the time for the First Lady and President Bartlett to get involved. One of the students asks the President if he considers himself a man of principle. The President relates that “We don't need more martyrs, we need heroes”. After the President leaves, another student asks "how it all began?" The First Lady relates the biblical story of Isaac and Ishmael - Isaac, the father of the Jews, and Ishmael, the father of the Arabs. Rakim Ali is cleared of any involvement in the threat on The White House and returns to work where Leo finds him and apologises for his out of character behaviour.

Many fans and critics of the show thought this episode was an exercise in ego, a waste of time because all the characters behaviours were not what was expected. That though was surely the point?

To see that when under the fear of imminent death even the most intelligent people will behave like reactionary dogs sometimes. The episode was made with no budget to speak of, written, rehearsed and filmed in less than three weeks, and the cast and crew donated their wages to the charities. At the same time a lesson was learned. A lesson that terrorism has been around for thousands of years, will probably never stop, and is never successful as not one group has ever got what they wanted by committing acts of terror on a helpless population.

As an episode of The West Wing I will bow to critics that it wasn’t up to the shows usual high standards, but as a one-off play, at a time when cool heads were needed and maybe should have prevailed in reality as on the screen, it is a work of genius.

The answer to "Islamic extremist is to Islamic as _________ is to Christianity." by the way is KKK. Yes we may feel that whole of Islam is against us here in the west, but extremists really are just well funded versions of the Klu Klux Klan.