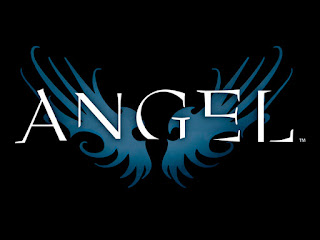 
I liked Buffy the Vampire Slayer. I'm one of those weirdos that prefers the film to the series but as a character and a story I thought it was refreshing to see a young person's show with some of the traits of the more adult horror industry bring a new generation some entertainment. I don't think it's a surprise that we saw a boom in YA fiction after Buffy aired and whether it helped to flood the vampire market with poor imitations is neither here nor there, it got young people to appreciate well written television. However Buffy is for other people to write about, mainly steven 'no capitals' harris, and I'm here to talk about the big brother, the darker spin off - Angel.

I'll give you my favourite episode reviews in the coming weeks and it will be interesting to see if you agree with my choices or argue that other episodes are better, but for now let's just chat? Spin offs are dangerous ground. They rarely work, Star Trek aside, so when Greenwalt and 'even my shit is solid gold' Whedon took the jump it could have gone horribly wrong.

A vampire with a soul that plays detective, a darker tone to the look of the show and the writing, and the new location of Los Angeles worked though. Los Angeles was never shown as the glitzy glamorous place Hollywood would have us believe it is and seeing the night-time underbelly of crime and murder with added demons was enthralling. David Boreanaz had settled as an actor, grown with his experience and made Angel a force to be reckoned with, whether on his own or as the leader of a team in later seasons, but it was the choice to use Charisma Carpenter's Cordelia Chase that launched the show in my eyes. I hadn't liked Cordelia in Buffy, I really don't have time for those popular girl characters, but to see her alone and not succeeding in her chosen dream added elements to the show and character that spoke to me as a man not fulfilling his own chosen destiny at the time and her initial reluctance and added humour really worked on screen in a way I hadn't imagined it would.

As the seasons went on new, more permanent characters were introduced all adding a different dynamic to the team and therefore the story. Gunn with his street smarts, Wesley with his Britishness and education, Lorne with his psychic karaoke (whoever thought that up deserves a Nobel prize in complete genius fuckery), Fred with her broken complexity, but it will always be Glenn Quinn as Alan Doyle that is my favourite cohort of Angel. A tragic man in reality with his own mental health and drug addiction issues, Quinn lit up the screen with his visions from the powers that be as a half human half Brachan demon and almost drunken Irish wit and whilst I adore all seasons of Angel the show lacked a little heart after he was no longer part of it.

As I remarked at the top of this rambling love fest I will provide reviews of those episodes I love from each season in due course but for today I leave you with my Top 5 in which I have selected just one from each season (otherwise it'd just be Season 2)... 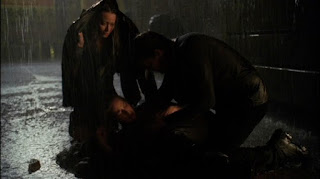 Charles Gunn: If you ask me, what we could really use right about now is some Vaseline and a catcher's mitt.

As Darla goes into labor, Team Angel tries to help her deliver the baby. Unfortunately, there are some unforeseen problems. Angel is captured by Holtz, who learns that Angel now has a soul. In the end, it's up to Darla to bring Angel's son into the world, no matter what the cost. 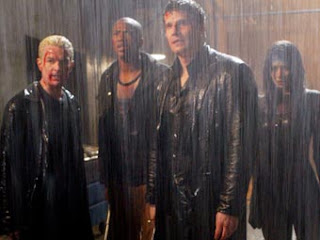 Spike: So... if any of us makes it through this alive, does one of us get to be a real boy?

Angel: Who are you kidding, Spike? You know that none of us are gonna make it through this night alive.

Spike: Good. As long as it's not you.

In the series finale, Angel reveals that his questionable moral behavior has been part of a bigger plan: to destroy The Circle of the Black Thorn and show the Senior Partners that the power of good can still make a difference. Wesley struggles with helping Illyria adapt to the world, scolding her for her attempts to take on Fred's form. As Gunn continues his quest of self-discovery, Lorne becomes more aware of the lack of happiness in the world. Harmony attempts to seduce Marcus Hamilton for information, Lindsey makes an important decision regarding his alliance, and Eve continues to deal with being mortal. As Spike comes closer to understanding the nature of heroism, Angel pays a visit to the one person he truly loves. On Angel's bidding, the gang goes out and spends each day as if it were their last. 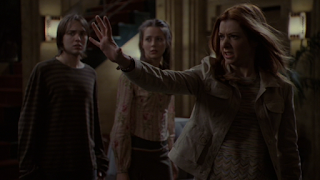 Angel: I'm not perfect, Faith. Even with a soul I've done things I've wished a thousand times I could take back.

Faith: Yeah, like those Manilow concerts. You son of a bitch.

Fred calls Willow to re-en soul Angel. She encounters unexpected resistance from a mysterious source. Faith's strategy to capture Angelus has an unexpected side affect. She enters Angel's mind and witnesses some of his past. 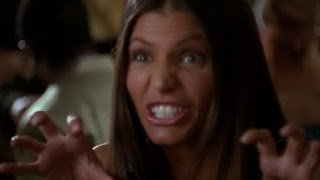 [he sneezes, his demon face emerges, he shakes it off]

Allen Francis Doyle: On my mother's side.

After Angel has left Sunnydale he comes to LA. He finds out that LA is not only about stars and money. When he meets Doyle and Cordelia they decide to start a service to "protect the helpless". 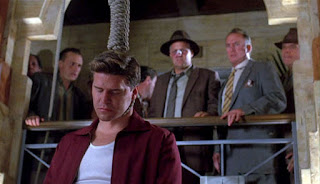 Thesulac Demon: Well, I don't know about you, but I'm stuffed! God I love people! Don't you? They feed me the worst and I kinda serve it right back to them, and the fear and prejudice turns to certainty and hate, and I take another bite and mmm-mmm-mmm! What a beautiful, beautiful dance! Oh, you got your feelings hurt, didn't ya? See now what happens when you stick your neck out for 'em? They throw a rope around it! And you thought you'd made a friend.

After running across it, Angel is vaguely familiar with an abandoned building, the Hyperion hotel. At his request, Wesley and Cordelia discover that Angel used to be a tenant in the hotel in the 1950s. At that time, Angel was pulled into a sticky situation with a woman hiding her past which lead to an unfortunate end. In the present day, Angel and the team attempt to rid the hotel of its demons.