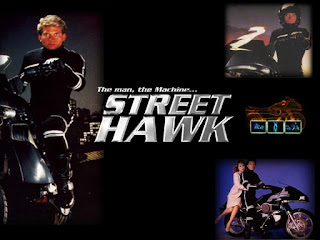 There is no scientific formula to prove what is a cult show and what isn't, so we just hope you enjoy our look back at those TV shows we personally think of as cult TV. This week Steve Taylor-Bryant takes a look at Street Hawk...


This is Jesse Mach, an ex-motorcycle cop, injured in the line of duty. Now a police troubleshooter, he's been recruited for a top secret government mission to ride Street Hawk -- an all-terrain attack motorcycle designed to fight urban crime, capable of incredible speeds up to three hundred miles an hour and immense firepower. Only one man, federal agent Norman Tuttle, knows Jesse Mach's true identity. The man...the machine...Street Hawk.

You can’t beat some 1980's cheesy television that starts with a voiceover and, growing up in Germany and only having the one English television channel, we were limited to what we had choice wise, hence why I grew up loving shows like Street Hawk whilst any sane person could put on something else.

Jesse Mach was a Police motorcycle officer who was severely injured in the line of duty. Recruited by a computer technician, Norman Tuttle, for a special government mission, Mach is given a life saving operation. He continues the facade of disability and, by day, is a Police Public Relations man but in his off time he tests the super motorcycle Tuttle has designed. During the initial tests, Mach decides to take on the criminal element of Los Angeles, not just do the tests Tuttle wants him to. With the mysterious Street Hawk running around crime fighting it is a PR disaster for the police department, often infuriating Captain Leo Altobelli.

Yes this show was incredibly bad. Yes this show was trying to jump on the Airwolf/Knight Rider bandwagon but there was something about it that instantly appealed to the ten year old boy sitting watching every Saturday. ABC Network moved it about a lot and it became a bit of a non fixture, not allowing it to firmly grasp an audience and after 13 episodes it was cancelled but its reach especially in Europe was huge. Toys were produced, I broke mine in two days, Ocean Software created a computer game and in the United Kingdom Target Books released four titles adapted from the episodes.

The show used Honda XR 500's for its main shoot and Honda CR 250's for the stunt work and the team had to have up to six of each model ready to go at anytime, due to the cheap fibre glass design of the Street Hawk which shed lots of its futuristic design as soon as the bike went over 30 miles an hour. Rex Smith who played Mach never really broke into the big time after Street Hawk but did appear in The Trial of the Incredible Hulk in 1989 as Matt Murdock/Daredevil. Richard Venture as Captain Leo was best known for his roles in General Hospital and Scent of a Woman and Tuttle actor Joe Regalbuto probably had the most success with a recurring role in Murphy Brown.

You have to watch this show. It is quintessentially 1980's and even Tangerine Dream's theme tune is cheesy.