TV - Around the World in Eighty Days 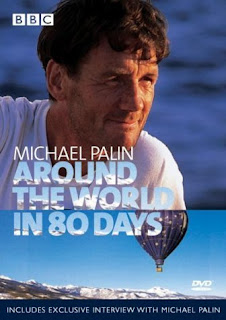 Susan Omand looks back at a television show that sort of invented the celebrity explorer as Michael Palin follows in Phileas Fogg's footsteps...


After Monty Python, Michael Palin went on acting and writing, most notably for Ripping Yarns with fellow Python, Terry Jones, but in 1989, he did "something completely different" and started travelling.

The whole "celebrity explorer" genre is quite common now, with people like Ben Fogle, James Cracknell, Charlie Boorman et al going to the far reaches of the world and challenging themselves for the entertainment of the viewing populace but, in 1989, it was a completely new concept. There were, of course, holiday programmes, where well-known personalities did a ten minute slot about African safaris or Marbellan beaches but nobody had ever attempted anything more ambitious for a TV travel show before.

Palin's first and, to my mind, best travelogue was Around the World in Eighty Days. The idea was to follow in the footsteps of the fictional Phileas Fogg and, as the title suggests, travel round the world, starting and ending, as Fogg did, at the Reform Club in London and all in a period of eighty days. This sounds easy but take into account that air travel was not allowed (the hot air balloon in the David Niven film never appeared in the book, although this did not deter Palin from doing one eventually) and that ocean going passenger ships in the 1980's were much fewer and further between, not to mention the fact that travel though some of the countries in the original route was difficult, if not forbidden due to visa restrictions and the enormity of the challenge becomes apparent.

The route Palin took followed Fogg's as closely as possible. From London to Venice and Greece, through Egypt and over the heart of the Muslim world to India then on to China and round the Pacific Rim to cross America before returning home. Like Fogg, he was accompanied by a Passepartout although instead of Fogg's single manservant, Palin's consisted of a film crew, director and large amounts of camera equipment.

Palin was seen off on his travels by two of his Python friends, Messrs Jones and Gilliam, who acted at the official time keepers and judges for the circumnavigation attempt, as did Fogg's banking friends in the book. Palin leaves in style, aboard the Orient Express. Remember that in 1989 the Channel Tunnel is not yet open, so a ferry crossing is required to get to mainland Europe and it the first of many and various boat trips on the journey. The EU was also not as open for travel in 1989 as it is now and the pressure of being on a clock soon became an issue when held up at customs on the Austrian border. This was not the last delay. Greece was on strike when they got there, having travelled through the Corinthian Canal in a ferry just 4 metres narrower than the canal itself. On to Egypt and, presumably to keep the holiday programme people happy, the obligatory visit to the pyramids.

Another day, another ferry... no, wait! Consternation as the onward connecting boat is cancelled, leaving the whole schedule in doubt as Palin is already 4 days behind Fogg. The only way to make up lost time is to drive overland to the Arabian Gulf - something completely unheard of in the 80's as every visitor to Saudi had to have a sponsor and there were no tourists. Achmed from the Ministry of Information, who himself sounded like a Monty Python sketch in the making, worked through the night to obtain the necessary permissions and on they went. A drive through the desert passing Riyadh, or "Riyadh, Texas" as Palin refers to the burgeoning westernised place he encountered, and on to Qatar and, for me, the most evocative part of the trip - a six day passage to Bombay (now Mumbai) on a traditional dhow. Over the next week, strong bonds are formed with the crew and you sense genuine regret at moving on from the microcosm world of the boat and its crew. It also marks the half way point in time, if not in distance, of the adventure.

The idyll of a week cut off from the world is shattered when they realise they are now a week behind Fogg's schedule. A packed train across the sub-continent to Madras (Chennai) and two passages on container ships, the first to Singapore, the second on to Hong Kong, at that time still a British colony. After a black tie event in Hong Kong, that necessitated a suit being made in 24 hours, and a meeting with his friend Basil Pao, who provided the photography for later travels, they both travel to China, as Basil, it turns out, spoke Mandarin. Travel from Guanzhou to Shanghai is by steam train and, after parting company with Basil, a ferry to Yokohama in Japan. In Japan such novelties as Karaoke and a sushi bar are experienced before boarding another container ship to cross the Pacific and, in doing so, also cross the international date line, which gives them some leeway in the schedule.

On day 63 they land in America and spend a week crossing the North American continent by several means, including the aforementioned balloon ride, before setting forth to finally cross the Atlantic and head again for the Reform Club in London. But did he make it in time?

I have both the book and the video of this epic voyage. Each highlight different things about it - the adventures, which I have sketched over here, as they are what makes the journey and I don't want to spoil it, are different in both. The tension of timekeeping is more evident in the show, the lovely description of the environments and the light humour of Palin's own commentary come across more in the book, although you do hear the writing in his voice as you read it. I really recommend that you experience both to get the full picture.

As I said at the start, this was only the first of Michael Palin's great adventures for the BBC. He has since been Pole to Pole (from north to south) and Full Circle (around the Pacific Rim countries). He's been to the Sahara and the Himalayas and followed in the footsteps of Hemingway. He has explored New Europe and even been back to visit some of the people he met in Around the World for a 20th Anniversary. One of his more recent travel adventure, shown on the BBC in November 2012, was called Brazil.

I wonder if Terry Gilliam knows?