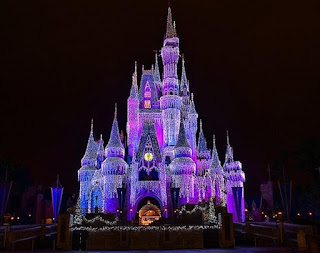 Susan Omand looks at the horrors of letting the Wonderful World of Disney anywhere near classic fairytales...

It was reading a review of  the Disney blockbuster Maleficent that started it.  The review said the film "is slightly disappointing for those of us who were looking forward to a deep and dark villain film" and it got me to thinking.  Everyone at The DreamCage knows that I love fairytales and fables.  One of the reasons I love them is because, in their original formats, they don't hold back on the dark and scary stuff.  They don't try to protect kids from the realities of life, indeed they were often used to educate kids on the existence of said dark and scary stuff in the first place.  Not everything in the garden is rosy, there really are some bad things and bad people out there and quite often it doesn't end happily ever after.  If you take out the dark and scary from a fairy tale, quite often you lose the point to the story and the fact that Disney had managed to add light to the darkness of Maleficent, the self-proclaimed  Mistress of All Evil, got to me a bit so I decided to have a look at a few of the other Disney films to see how they had been Disneyfied, but if you want to retain the rose-tinted spectacles of "happily ever after" you may want to stop now.

A prime example of Disneyfication (yes it is a word) is Snow White.

In the Disney version, through a storybook start, we are introduced to Snow White as a teenage princess living with her stepmother, a vain and wicked Queen who is only assumed to have taken over the kingdom after the death of Snow White's parents.  The huntsman charged with killing Snow White, pleads with Snow White for forgiveness and lets her go, bringing back the heart of a pig for the queen as proof Snow White is dead.  Snow White then finds the dwarves cottage and, assuming they are orphaned children, tidies up for them.  They take pity on her, allowing her to stay while she and the birds and animals cook and clean for them as they work hard in the mines and everyone has fun evenings of singing and dancing.   The Wicked Queen only has one attempt on Snow White's life, tempting her with a poisoned apple.  Finding their darling house-guest seemingly dead, the Seven Dwarves, who by the time of the Disney film have their individual names and characters, are out for vengeance and chase the queen to the top of a cliff where she accidentally falls to her death.  The "dead" Snow White is put into a glass coffin and the dwarves stand vigil over her before she is awoken by a prince who came in search for her with "love's first kiss" - eughh!

In the original Brothers Grimm version, we find out that the wicked Queen is Snow White's real mother and, as soon as Snow White is just seven, and becomes more beautiful than the queen, at least according to the magic mirror, she is abandoned by her mother in the woods where a huntsman is sent after her to kill her.  The huntsman finds her and, after she pleads with him to spare her, he leaves her in the forest believing she will be eaten by the wild animals, taking back the heart and lungs of a boar to to replace the organs requested by the Queen as proof of death.  Snow White finds the dwarves cottage, where she eats all their food and drinks all their wine then falls asleep, to be wakened by them on their return.  They tell her "If you will keep house for us, and cook, make beds, wash, sew, and knit, and keep everything clean and orderly, then you can stay with us" but she is to let nobody in to the house.  The Wicked Queen finds Snow White and tries to kill her three times.  First by disguising herself as a peddlar and lacing Snow White into a bodice so tightly that she cannot breathe, only to have the dwarves rescue her at the last minute, secondly through a poisoned comb that gets jabbed into her head, again to be saved in the nick of time by the dwarves, and thirdly by a poisoned apple that jams in her throat and sends her into a state of suspended animation.  The dwarves don't want to bury her underground, so put her in the glass coffin, where, after some time, a passing prince sees her and is attracted to her even though she is "dead", ordering his servants to carry her off.  An accidental stumble over tree roots dislodges the apple and Snow White returns to life, whereupon the prince declares his love for her and they arrange their wedding, inviting all in the land, including the Wicked Queen, who is made to dance in red hot iron shoes until she dies.

So Disney has made it very black vs white while still ensuring that nobody actually gets murdered.  They have also managed to hide the imprisonment, necrophilia and maltreatment. But the Disney version could also have been so much cheesier than it actually was - the Dwarves were nearly called Wheezy, Baldy, Gabby,  Lazy, Tubby, Shorty and Burpy. And the statuesque wicked Queen started life on the storyboard as a 'fat, batty, cartoon type, self-satisfied' Queen in an attempt to bring humour to the story.  It is said that Disney paid his employees $5 for every joke they could come up with to try and lighten the script.

There are many many other children's stories that have been sanitised and sugar coated by Disney.

In Disney's Cinderella, no mention is made of the mutilation of the "ugly" sisters who, in the Brothers Grimm version were in fact beautiful but heartless.  When the time comes to try on the slipper, they slice off their own heels and toes to make the shoe fit.  Some birds tell the prince of their deception so he eventually chooses Cinderella and it is these same birds who peck out the eyes of the sisters and their mother at the wedding for being so cruel to her.

In the Fox and Hound, instead of staying best friends forever as in the film, in the book the fox is chased to death by the dog who, in turn, is shot by his alcoholic owner who is due to move into a retirement home and can't take the dog with him.

In the book of Peter Pan, Peter actually "thins out" the Lost Boys when they become too old for Neverland and sometimes, in battles against the pirates, he would switch sides and start killing his own team just for the fun of it.  Move over Hannibal Lecter.

Even in Sleeping Beauty itself, the fairy story contains themes of incest and rape.

So is Disney a good thing for children?  Does it protect children from too much violence and horror or does it over-protect and remove the moral of the story?  And what of the original stories themselves?  Let us know.