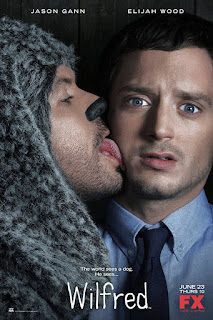 We want some of whatever Susan Omand is on, as she tries to explain a show we’re not even sure exists...

I tried to explain it to a friend of mine. “So Frodo Baggins is smoking pot in his basement and arguing about the next door neighbour with his best friend, a six foot tall talking dog with an Australian accent...” What do you mean what am I on? This was a great little half-hour comedy series that passed a lot of people by, called Wilfred.

Wilfred (Jason Gann) is the dog in question, belonging to the next door neighbour of Frodo...er... Ryan Newman (played by Elijah Wood so you can see where the confusion arose). Ryan is a manic depressive, whose life had taken a dramatic turn for the worse when he was made unemployed and, with nothing left to live for, no job, no friends, his sister constantly on his case, he decides that his only course of action is to take his own life and he would be less of a burden to others dead than alive. At this very, very low point, he is asked to look after Wilfred, a normal shaggy mongrel dog that belongs to his next door neighbour (Fiona Gubelmann). Ryan agrees but discovers that he doesn’t see Wilfred as a normal dog. Instead, he sees him as a grown man in a grey furry dog suit with a painted on black nose and very bad habits and this is where a lot of the humour comes from as Wilfred talks, convinces, goads and sometimes dumps Ryan into really uncomfortable situations – a kind of devil on his shoulder.

This is billed as a comedy but there is a lot more to it than that as Ryan and Wilfred deal with life, his family and his new crush on the next door neighbour. Yes there is a lot of humour in there; silly, slapstick, obvious, black humour and wonderfully ridiculous situations. It’s also very clever and surreal, in that Wilfred, as the dressed up man that Ryan sees him, still actually acts like a dog, chasing his tail, shouting at cats and being extremely inappropriate with large stuffed teddy bears, while also acting like that layabout buddy that we all have, crashed out in a pile of pizza boxes and beer bottles in the basement, high on something or other and coming up with brilliant (to himself at least) hair-brained schemes. But Wilfred also highlights the other side of friendship. He tries his best to get Ryan out of the scrapes that he gets them into. He’s there for Ryan to talk to and listens with true dog devotion, coming up with utterly incongruous, deep and meaningful responses to soothe when needed at times whilst, at others, he takes the mickey to knock Ryan out of some difficult downward spirals. Wilfred never really walks away, using tough love sometimes when Ryan needs it but always being there in the background keeping an eye on things.

The show, a US remake of an Australian original, ran for 4 series and the finale came full circle as Ryan discovers the truth about Wilfred, and about the basement in his house, but still decides to hold on to the delusions in his head anyway, just because they make him happy.

Ryan: "I mean, there are things that make you happy, but it's not a sustainable feeling. Parades don't last forever. Fireworks burn out. Colours fade." (Attractive woman walking by)

Wilfred: "It's not about parades and fireworks. It's about that pair of tits there, that's happiness. A scratch behind the ear. The sun in your face. A decaying seagull carcass. Happiness is in the quieter moments, mate."

Ain't that the truth?

Quote and image from IMDb
Email ThisBlogThis!Share to TwitterShare to Facebook