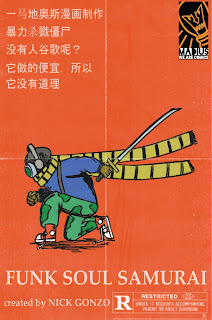 Steve Taylor-Bryant gets the funk out and enjoys Nick Gonzo's Funk Soul Samurai from our friends at Madius Comics...


The guys at Madius comics are the walking definition of 'bat shit crazy' and seem to find ways to stretch normality and basically get away with stuff you won't find in any other comic but with Funk Soul Samurai it finally appears that one of the team is slightly more off the reservation than maybe the others and, honestly?, I think I'm a little in love with Nick Gonzo.

Hero without a name.

A butt-tonne of sound effects.

The worlds of early-90s fashion, and post-apocalyptic action movies collide in this hyper-violent vignette. A book with no words, no language barrier, just action.

Unrelenting (until it stops).

Unceasing (until it ends).

This ain’t your Grandma’s Samurai,

I could probably just leave this article with the above blurb from Madius. It really does have no words to drive a story, just images. It really does have the feel of a great MTV show, Beavis and Butthead era not modern celebrity tours your house era, and it really is post-apocalyptic movie related in its feel but it's far from 90's in any other way! Growing up in the world as it was when I was young was a brilliant time to be alive. We had punk. We had students with attitude. We had fanzines. What Nick Gonzo has created would fit right into one of those magazines of the late 70's or early 80's as it really has that in your face, I don't care, complete lack of subtlety about it. Think Sex Pistols drawing something and you'll begin to see what I'm on about. 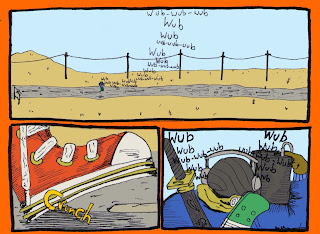 The art is scratchy, nowhere near as polished as you'd get from a 'Big Two' comic but that's not a criticism, in fact the last time I saw art that didn't care and suited the insanity so much was maybe Jim Mahfood in Tank Girl and for me there is no higher compliment. I don't know if Nick Gonzo is just trying to push boundaries, or see how far he can go before someone stops him, or whether in fact he is actually in need of some help on the mental health front, but I don't care. Nick Gonzo has refreshed comic reading for me. He has showed that the spirit of my youth is still alive and well and living in an extreme sports sword wielding milkshake drinker. My goodness this is the best assault on my eyeballs since one of the Jennifer twins stabbed me with a biro in school and for that I am truly grateful.