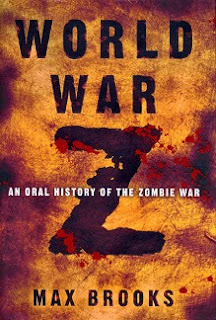 
There’s a distinct stench of rotting flesh around the /G-f offices this January (with more to come). Is it the dark nights, the cold depressing vista or do snowdrops in Spring just make us hanker for the undead? Who knows.. but we thought that now, with the film sequel World War Z 2 having more director issues, was the right time to revisit this zombie epic.

Following on from his humorous but lightweight Zombie Survival Guide no one was really ready for such a superb and chilling book. Here, after previous fun and japes, Mr Brooks delivers a chilling and thoroughly engrossing diary of the end of days. Presented as a series of interviews with the survivors of the first great Zombie war, World War Z is a must for any self confessed aficionado of the undead.

By throwing out any ongoing narrative or doom laden romance and instead relaying terse and quite disturbing interviews with those who survived, Brooks paints a horrifying and creepily realistic take on how the end of the world may look.Beginning slowly with tales from illegal organ harvesters and third world infection the book soon snowballs into a pointless struggle to hold back a less than fragrant tide. Soldiers, sailors, doctors, bloggers and ordinary people all recount their memories of the planets darkest days. There is a certain cold and chilling essence to these accounts that add to the overall feeling you are reading a true history book. Indeed, the whole clinical approach leaves a far longer lasting impression than any handful of shock and gore novels ever will. This is an assured and remarkably intelligent work that belies its rather fanciful premise. Trust us, the TV reports of avian flu and unexplained riots will never seem the same again after reading.There is a reason Simon Pegg described this book as “an absolute must have.” Pick it up and find out for yourself how the end will come about.