Book - Cannons in the Clouds 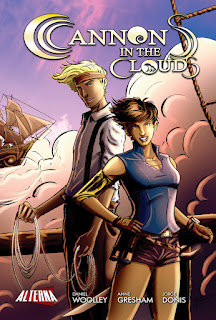 In a mile-high world of floating islands, Sela Windbourne flees her sheltered life to find adventure. Along with the talented and mysterious steeplejack Robb Cadman and the notorious sky pirate Jenny Avery, Sela must confront a violent conspiracy that threatens to send her entire world crashing down!

Sela Windbourne is a girl of high standing, with her father being head of a large construction company, meant to live the life of the well to do, taking lessons from a private tutor every afternoon and learning to become a lady. However, she is also a bit of a tomboy who loves nothing better than fishing, competing in races and looking at battle tactics from the Great Unification War. What needed unifying? This is a planet of islands floating in the sky and how they got there is beautifully told at the start of this comic when Sela, fresh from a fishing trip, comes across an “end of the world” prophet who relates the tale and gives the full portent of doom. However Sela is late for a competition and runs on, only meeting her best friend Maya after the race when they head to Sela’s father’s construction site, where he is overseeing the building of a great bridge between two of the islands. He welcomes Sela but then sends her back to the house for her daily lessons, which is where she falls out with yet another tutor over battle tactics in history and, once her father returns home that evening, her parents decide that it may be best if she goes to boarding school. Eavesdropping on their conversation, Sela is having nothing of this and packs a bag to run away, heading for the docks. On the way she passes the bridge construction site and sees what seems to be men working after hours but all is not as it seems...

So begins a riproaring tale of sabotage, kidnap and piracy that I found incredibly enjoyable, even though it is marketed as a young adult graphic novel, actually a collection of five comics, by Alterna Comics. The action never let up and there were no major plot holes or “but why” moments, as there sometimes can be with fantasy world stories if they don’t follow their own internal logic. I also loved the concept of the planet in general as being islands of rock floating way above the surface so that you used flying ships, not metal interplanetary space ships mind – actual flying 3 mast rigging wooden sailing flying ships, to move between. This world building was added to even with small touches like the fish Sela catches at the start, having white dove’s wings and the way the back story of the war and the legend of how the world got that way was incredibly cleverly conveyed to the reader by the day of judgement character at the start. It “got it out of the way” without feeling clunky or taking you out of the story itself. 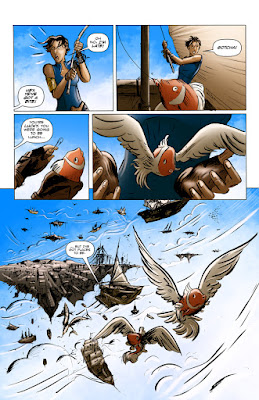 There was also the merest hint of steampunk about the setting and the characters but it was only to add flavour to an already action packed tale and didn’t get in the way of the story telling as it sometimes can when people try to make an obvious point of “using” steampunk technology in a tale. The characters themselves were all very believably written and beautifully drawn with pirate Jenny and Sela’s mother being much less stereotypical than I was expecting. It also came across well throughout the novel that Sela and Robb were equal partners in their plans, each helping the other, but I also loved the way that Maya used others’ expectations of her character to further their strategy when required. I must add too that getting the character sketches and descriptions at the end of the comic was a really good idea as it helped to flesh out the characters even more to learn about the concept behind them.

If you ever played at being a pirate, or a spy, or running away to sea and having a great adventure, this is a quick, easy and fun read that will leave you excited to see what happens next to Sela and Robb. And I now have cable envy but you’ll have to read the graphic novel to see why.