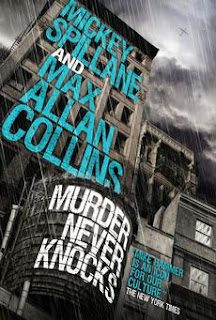 Susan Omand straightens her fedora and hits the streets, on the trail of a new novel from an old master of the detective story, Murder Never Knocks...

“What’s that you say? There’s Mike Hammer stories that I’ve not read? That can’t be true!” Thus went my thought pattern when I found out that Titan Books were releasing new, never before read, novels about author Mickey Spillane’s most famous New York private detective. There was only one issue, Mickey Spillane didn’t write them. Or, at least, not all of them, as the new novels have been written from his notes and half finished chapters by another master of the genre, although of a different style, Max Allan Collins; an author hand-picked by Spillane himself, before he died, to pick up his unfinished work.

So what of the story? Set in mid to late 1960’s New York, around the timeframe of the Spillane novel The Body Lovers, Murder Never Knocks sees Mike Hammer on the hunt for someone that is on the hunt for him...

A failed attempt on his life by a contract killer gets Mike Hammer riled up. But it also lands him an unlikely job: security detail for a Hollywood producer having a party to honour his beautiful fiancée, a rising Broadway star. But it’s no walk in the park, as Hammer finds violence following him and his beautiful P.I. partner Velda into the swankiest of crime scenes.

In the meantime, Hammer is trying to figure out who put the hitman on him. Is there a connection with the death of a newsstand operator who took a bullet meant for him? A shadowy figure looking for the kill of his life?

And the verdict? Very enjoyable indeed! The story flowed the way it should, with some good left field twists in a great plot, and the character all worked and were well rounded and engaging, even the minor ones. One thing I liked about the original Mickey Spillane novels is that, even though there is a lot of sex and sexual reference in the books, the female characters, especially Velda who is Mike Hammer’s partner in the firm as well as in other ways, are strong individuals in their own right and not just there to be objectified, they have an important part to play in the stories. The violence was as vicious and bloody as I remember it too, never overly graphic but you could feel the crunch of fist on face in the fights and not everyone gets out alive, which is as it should be. Given that I have read a LOT of Mickey Spillane in the past, I could tell that it wasn’t all his writing but I couldn’t put my finger on the reason why I think that. It’s definitely close enough that you can’t “see the joins” and none of the ideas were awkwardly handled or the plot clunkily put together. It’s just... different. But still very very good and I’ll be on the lookout for the other Mickey Spillane/Max Allan Collins collaborations now because it’s really nice to have my favourite detective back in print.