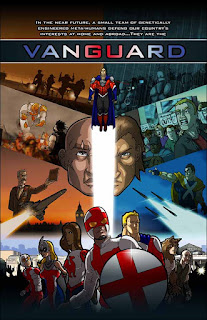 Steve Taylor-Bryant discovers there's much more to superheroes than Marvel and DC as he reads Vanguard from Dan Butcher...

I'm not a huge fan of superheroes any more. The 'big two' have tainted my enthusiasm with constant meddling, and fan comics are never as good as you want them to be. I find it hard to commit to weekly or monthly webcomics and I don't know why that is, so I'll be honest here... I only took a look at Vanguard because I like Dan Butcher. He is a witty guy, smarter than most people who are allowed on social networking, has well thought out opinions, even if sometimes they are the polar opposite of mine, and the support he shows anyone and everyone starting out in comics is an enviable trait. Whether it be a review, a tweet to support someone and their crowdfunding project, or advice on how to draw or some technical element, the man is a 'go to' for all. In fact he's too nice, I don't like him now!

I've known of Vanguard for a while and vaguely remember reading a page or two a few years ago but my own personal thoughts on comics, and lack of time, meant I didn't commit to it. This was a glaring error on my part as Vanguard is all that is right with comics, all I've been wanting for years, and now I've forfeited the right to claim I'm some kind of hero that's been there since its inception and I have a nose for talent blah blah. For this I can only apologise to Dan for prejudging what his version of superheroes would entail and admit my own failings as I play catch up with the rest of the sane world in stating that Vanguard is a must own. 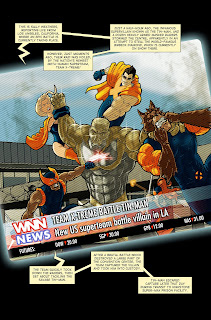 Vanguard is in no way flawless but the problems are slight and go away quite quickly. At the beginning I felt the art, whilst good, wasn't consistent but, as the book goes on, you can see a vibrancy and obvious talent start to shine through and, come the end, the artwork, the colouring, everything about each page has a confidence about it that shows a master at work and I like that. I like that you can see a progression from starting out to completely at ease with your created world, it shows a creator that hasn't abandoned his webcomics roots to make a buck by redoing earlier work, it's a 'warts 'n' all' journey and I'm highly appreciative of that approach and wish more comic makers were built like this. It's not about a perfect book for a teenager to keep on their shelf, it's about a creation that grows from seed to tree.

Come the end, I'm not totally turned around on the superhero genre but I'm more hopeful. Dan has written about more than men and women in Lycra and capes showing off. He has written about the world we live in, our successes and our failures, and shown himself to be a force to be reckoned with and that's why it's a must own - it's us in cartoon form.