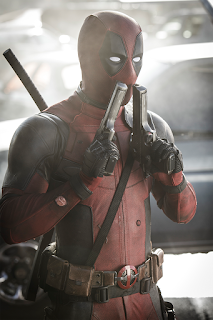 Our own Merc with a Mouth, Steve Taylor-Bryant, watched Deadpool and he's gon' give it to ya...

Look beyond the crudity on screen though and there is something beautifully rebellious you don't get in mainstream cinema any more. In a world full of superhero films, reboots and origin stories that are a billion dollar industry it's no surprise that meddling studio executives will get involved. They want the 12 (PG13) rating to sell toys, to put a bigger audience on the seats, they want children playing with overpriced action figures, they want the next generation of fans of their respective studios to become addicted to their products. They are the big tobacco lords of the media age. They honestly don't give a shit about you! Name a superhero film of the last decade or so that was improved by being watered down? Look at Ant-Man and Fantastic Four? Were they great because the studios skewed the film-makers vision? Er... No! So how do you go against the grain? How do you get what you want something to be on that screen for an audience so they may judge for themselves? Well you get likeminded people together and do it with little or no investment from the studio and then attack everything because you can and watch the money roll in. You become petulant children, you market the film your way and play on people's expectations until they don't know what they want any more then you go give it to em...

Ryan Reynolds will rightly take the credit he deserves for Deadpool. This is a man who bears the scars of poor superhero film making, who could be forgiven for never wanting to wear a costume again. Reynolds, however, owns this film and struts and bullies like he's in his therapy session. The studios get it, the financiers get it, the franchise the character is from gets it. Hugh Jackman gets it, DC and Green Lantern get it, poor old Liam Neeson gets it and Reynolds even dishes it out to himself. It's cathartic. It's nuts. It shouldn't work. It does though and with aplomb! It's what every disenfranchised film fan has said themselves over the years put up against the backdrop of extreme violence and a soundtrack containing Wham! It mocks where it came from "is it Stewart or McAvoy now I get confused?" and "you think the studio would pay for more than two X-Men wouldn't you?" sort of sum up where some of us stand with evolving franchises. Superheroes can't have sex won't someone think of children? Nope. Reynolds seems to relish the nudity and one fight scene in particular is reminiscent of Oliver Reed back in the day, just two enhanced supermen wrestling with the Crown Jewels on display. Needed? No. Important? Hell yes! It's another example of this group of writers, stars and director going out of their way to buck trend. There's probably a reason you haven't seen a man's penis during a wrestling scene since Reed did it in the 60's but it was as refreshing as it was uncomfortable to watch.

What scribes Rhett Reece (Zombieland) and Paul Wernick (Invasion Iowa) have done is blend the essence of Rob Liefeld and Fabian Nicieza's comic creation and managed to also stick up its middle finger at studios at the same time as playing to Reynolds' strengths. They have maybe not redefined comic book films but they have shown there is another way and an expectant audience and with Tim Miller at the helm you have a director not brow beaten by Hollywood as this is his debut behind the camera which leads to just the most amazing film project.

If you still don't know what to expect, listen to the Deadpool Rap as it just explains it so well! Now where's my chimichanga, lube and unicorns at?