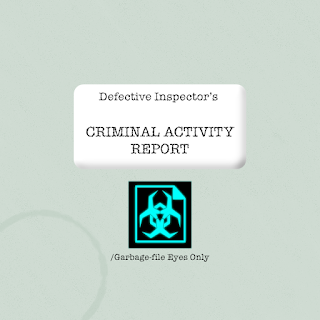 The Defective Inspector is back in the offices of /G-f after his field trip to give us a monthly round up of all the indie gaming news in his Criminal Activity Report. Here is February's file.....

Love is in the air, well it was. Now there is a stagnant smell of regret and a strange taste of unpleasantly old chocolate in my mouth…

While I’ve been nose diving into comic book festivals I’ve never forgotten about my root, here in the gaming world! So let’s get to it shall we?

Game Tycoon 2 has been developing since October 2015 but recently took another great jump in its monthly updates. This time it’s provided a tutorial! One of the biggest dips in the game’s reviews seem to come from a lack of assistance, so this is moment we’ve been waiting for. Considering how good the original game was I think we should give Game Tycoon the benefit of the doubt, so give it a go!

Ever since Minecraft went full Microsoft I’ve been looking for a new 3D sandbox adventure game. Portal Knights is looking like a good contender for this unfilled void in my soul and it’s due to be released on 25th Feb 2016. Saying it’s a clone is not fair, there seems to be a good bit more of a plot involved, much better combat dynamics AND I can be a wizard like any good adventurer should be. It’s showing itself off on steam already, worth a consideration!

Spent too much money on your partner’s valentine’s gift? Well foolish of you to have a partner in the first place! But I feel pity on you and thus give you Legends of Callasia. It’s one of many free to play games out there but, surprisingly, it’s received some rather encouraging reviews. My guess it would due to the lack of hot seat waiting on a turn based game, keeps the fun going! It’s worth a try for £0 today with 0% interest.

This one is a bit of a curve ball. Recent reports since its release shows it was considered completed game a bit too early and should still call itself in testing. However many heralded the game for its interesting concept and entertaining gameplay during the Early Access days. It’s put itself on offer, 10% less on Steam, probably as a way of saying “We’re working on it”. Sometimes investing today could save you money tomorrow and appears to of been worth it before release. I’ll admit it’s a gamble, but the idea of a RPG Tycoon simulation is a bit too interesting to ignore.

Crowdfunding Project of the Month: Wandersong

Over the last few weeks I’ve had a chance to play some pretty interesting games, courtesy of the IGF Award’s recommendations. Today I am showing you something which I can see being in the nominations list next year; it’s called Wandersong and it’s rather beautiful! You are a travelling bard who, through the power of song, interacts with the world to solve puzzles and uncover secrets. The whole concept is colourful and light hearted and sometimes that’s what you want in a game. I’ve caught this one a little later than usual with only a few days left to get involved. The music is the key to loving this concept so I encourage anyone to check it out with the speakers turned up to 11.

And that’s all for today people! February is a bit of a sickly sweet month and I’ve endured some rather unique weather in what’s meant to be spring. PERFECT! Keeps me indoors and obedient to my /G-f masters/mistress’. This month they paid me in left over V-Day chocolate!

Images are from Steam and Kickstarter
Email ThisBlogThis!Share to TwitterShare to Facebook