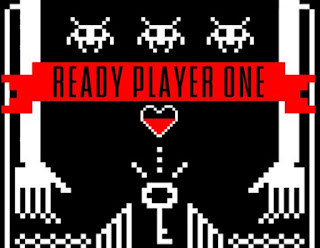 Nate McKenzie's thoughts on the book that has spawned our Project RPO challenge, Ready Player One by Ernest Cline…

See all the reviews in our Project RPO Challenge here


When you were a kid, if you had any imagination, it was a daily occurrence to daydream about being swept up in some fantastical adventure that took you to new worlds and brought you into contact with new interesting characters and strange creatures. Perhaps there was even some sort of prize awaiting you at the end of that journey, like the love of a prince or a hoard of valuable treasures.

As adults we don't often get a lot of time to daydream wistfully. For many people, reading a book or watching a movie is their only escape from reality. Life gets in the way and we forget those moments from childhood that allowed us to reinvigorate our imagination and sense of adventure.

This lack of escape is precisely the reason that I am brazenly obsessed with Ernest Cline's Ready Player One.

If you haven't read it (which should be at least a second degree felony if you call yourself a geek or nerd), let me break it down for you real fast:

It is the year 2044 and Earth is a dystopia. Wade Watts is a high school senior living in poverty. He spends his days in a virtual reality called OASIS, which is utilized by almost every person in the world for everything from video gaming, education, dating, shopping, and business. It's the internet but with V.R.

OASIS creator, James Halliday has died and left his fortune and control of his company to the person that can navigate his elaborate puzzle game within OASIS and find his hidden Easter Egg. Wade is an obsessive scholar regarding the pop-culture of Halliday's youth and uses that encyclopedic knowledge in his quest to find the Easter Egg and gain fame and fortune.

Technology plays a large role in Ready Player One. To be accurate, technology is an actual character in the narrative. If a living thing is made up of smaller living things then the OASIS is surely a massive, tangible, living thing.

However, the trend regarding technology in books in, say, the past 25 years, is to saturate the reader with rigorously researched technicalities. Michael Crichton was a master of this. But Crichton did so to enhance his already superb stories whereas many writers now use scientific accuracy as a way to legitimize their story. Some stories are bolstered by this process (The Strain Trilogy, The Girl With All The Gifts) but some (many) become terribly mired in the scientific syntax of the technology they are trying to bring to life (Nexus, Wired). That's not to say those that fall into the latter category aren't entertaining stories. But they do lose a bit of the magic of fantasy when they get weighted down by worrying too much about being plausible and explaining exactly how their story could happen.

Cline actually expounds on the origins of the OASIS without being either too technical or too obscure. The way Cline brings to life the technology as a living, breathing character reminded me of H.G. Wells Tripods in War of the Worlds - a high praise, to be sure.

(Note: Don't expect cautionary comparisons from me citing the evils of technology enslaving humanity. I stand by our future robot overlords.)

Ready Player One's mix of science fiction and science future is every bit as realistic as the stories from Heinlein, Asimov, Dick and their peers. He also displays self-aware humor reminiscent of Douglas Adams. I'm not putting Cline's bust on a mantle next to those of the Sci-Fi greats, I'm just saying that Ready Player One is a stout example of his ability to infuse fact and fiction, technology and inspiration, to create something that seems closer than the not-too-distant-future. The 'Flicksyncs' (a challenge that Wade must solve along his quest) are a great example of this: movies that are video games in which the player commandeers the role of characters within the film using the virtual reality technology, delivering lines and actions as if they were actually in the movie. That is a brilliant concept that seems more and more tenable with every leap that science makes.

As great as the science-fiction side of Ready Player One is, the fandom that has cultured from adoration of the book is mostly a product of Cline imparting his own passions using the vessel of his story. If you have an affinity for anything geeky, the 1980s is a haven; a safe place where all sects of film, television, gaming, and music nostalgia coincide without judgement. The 80s is a goldmine for nerds. Cline plays on that but not to be malicious or self-serving; quite the opposite, in fact. He wants Wade's quest to feel like it is your quest, the way Bastian joins Atreyu in his journey to save The Childlike Empress in The NeverEnding Story. As Wade races through the puzzles and challenges of the hunt for the Egg, you, as the reader, race through the words and pages, only stopping to take a break as Wade has a chance to rest. Very few books have I read that pulled me into the story quite like Ready Player One. It is a totally immersive experience, much like a full-body haptic rig. (You'll get that if you've read it)

There is a saying: "Write the story you want to read."

That, simply, is what Ernest Cline did. He wrote an adventure that he himself would love to go on, and stuffed all of his favorite things into a story about a kid that we, as adults wish to be, that we all have been, if not in true life then at least in our minds.

Luckily, in the OASIS that is the same thing.