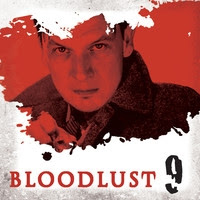 As night falls on Collinsport, Susan Omand heads into the Dark Shadows to listen to Bloodlust Episode 9...

Quentin Collins has taken Tom up to the family tomb at the cemetery for his own safety. Tom starts whimpering and shouting as the curse of the full moon overcomes him.

Kate admits to Frankie and ex-Sheriff Rhonda Tate that she lied about where she was when the attacks happened, claiming to have spent the nights at Eagle Hill cemetery rather than the motel because she is still not over the memories of that Halloween night. Frankie is surprised that it’s still a problem for her and Rhonda points out that it’s not an alibi but Kate doesn’t care and Rhonda believes that it wasn’t her and leaves, while Kate heads out to cover a shooting near the beach because life goes on.

Deputy Sheriff Eric reports back to the new Sheriff, Maggie Evans, on the identity of the latest victim. Mike Devereux, who is helping Maggie, says it may have been people trying to “do the right thing”. However Maggie can’t condone violent retaliation and is more determined than ever to catch the original attacker to show they’re doing something positive.

Kate gets to the murder scene and asks Eric what happened. Eric says he can’t comment but Kate urges him to do something to find the killer. Kate starts to head back into town but gets sidetracked.

Harry is home from the hospital and being cared for by Amy, who then goes out and look for Tom, even though there is the curfew and she knows Tom was going to be out with Quentin. Meanwhile Tom has completely changed and Quentin feels the pain and the rage of the curse that he also used to experience. Quentin leaves him to his howling.

Cody and Jackie call in on Sheriff Maggie, saying they want to help. Rhonda Tate is mulling over crime scene photos at home when she comes to a startling conclusion and phones Dr Hill.

Kate’s sidetrack has taken her up to the mine where she gets caught snooping by David Collins. He recognises her as Frankie’s girlfriend and they talk about the loyalty of the workforce. She asks questions about the mine and they end up bickering and David Collins sacks Frankie because of her then asks her to leave.

Quentin meets up with Barnabas and Angelique and they ask how Tom is. Quentin admits to leaving him because he couldn’t stand to stay while Tom was changed. Angelique is still trying a spell to get into Collinwood but she is being blocked. Quentin is impressed that she’s not out for revenge after the earlier shooting and offers to go looking for books to help but then they both notice that Barnabas is gone.

This felt like an episode of two halves as far as the story goes, the first setting up all the scenarios and questions and the second half providing at least some of the answers as we find out what Rhonda discovered, who has been blocking Angelique’s attempts to mentally get in to Collinwood and the fallout of the fall out between Kate and David Collins. We also find out where Barnabas has gone but the reason for his actions remains to be seen and I’m still not entirely sure about what Tom’s character is for. With so much of Kate’s back story now hinging on the events of her Beyond the Grave Halloween special, I found it has really helped to know that story before this one as a lot of her actions wouldn’t make sense otherwise. This is not quite so obvious with the other characters as you get the general gist of where they’re coming from without much, if any, prior knowledge and the mentions of previous stories and events for them are more by the way than pivotal to the character. The soundscaping in this episode was particularly good as there were several scene stealing moments of no dialogue when effects alone described what was going on and really added to the suspense.

With four episodes to go, it’s beginning to feel like we’re getting a step or two closer to the real attacker with a few small mentions this time that may well become much more important. Or they may just be red herrings. We’ll have to wait and see.

The episode is available direct from Big Finish
Email ThisBlogThis!Share to TwitterShare to Facebook