Audio - Doctor Who: The Shadow of the Scourge 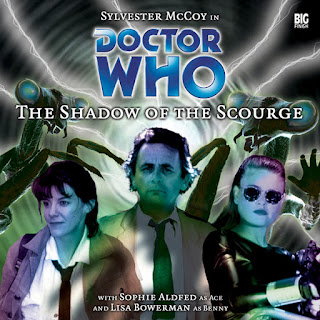 Our Doctor Who audio expert, Tony Cross, delves into the back catalogue available from the Big Finish website. Today is the Seventh Doctor, Ace + Bernice Summerfield adventure, The Shadow of the Scourge...

Well, that was rather good. The Shadow of the Scourge is a bit different to other stories I've listened to so far in that it sits in the Virgin New Adventures continuity and not the Television series continuity. If you believe the two are separate in the first place obviously, which I don't. Me, I'm a fan of everything being canon.

Even if that makes for hard work justifying how, say, The Doctor is in Pompeii on Volcano Day twice and the Tenth Doctor doesn't comment on that fact. Not that he needs to. After all he's got things on his mind. I like to think that maybe the TARDIS bought him back because 'she' felt there was unfinished business from The Fires of Vulcan. But I digress. Drastically. Basically this story has Ace in her 'warrior' phase and Bernice Summerfield.

If you are unfamiliar with Bernice Summerfield then I suggest you become familiar with her as soon as possible. She was created by Paul Cornell, who wrote The Shadow of the Scourge, as a new companion for the Virgin New Adventures. Based personality-wise, if memory serves, on Emma Thompson's character from The Tall Guy* she was a Professor of Archaeology with a fine line in dry sarcasm and intelligence. She appears in a Big Finish series of her own, which had begun in 1999. This is - I think - her first appearance in the Doctor Who Main Range. She's played - with fine style and panache - by Lisa Bowerman.

The Ace - Bernice pairing makes an interesting combination. The New Adventures had put a lot of history behind that relationship - see the book/Big Finish Audio of Love and War for their first meeting. None of that is really felt in this story but Ace is a much more martial figure than she was the last time we saw her on the television (or in The Fearmonger). I always liked Ace - television version - but found the more angsty and angry New Adventures Ace a bit much. Here we don't get much of the latter even though that's who she is. She's more like the television version, just with her fighting abilities improved and wearing a much more fetching outfit. If the terrible cover is any guide.

Yes, I'm sorry Big Finish but that cover is awful. There. Said it. Sorry.

This story is thematically not dissimilar to Remembrance of the Daleks/Silver Nemesis. The Doctor has put a cunning plan together in order to trick a set of villains into destroying themselves. In this case the villains are The Scourge. They are pan-dimensional insects with a penchant for torture. They thrive on human fear and despair. They've been hunting humans down since there have been humans. They're basically not very nice.

The first two episodes are basically setting up the Doctor's cunning plan and then the second two are how everyone manages to survive the Doctor's plan not quite going to...er...plan. The cliffhanger for episode two is rather wonderful.

This being a Paul Cornell story there's a lot of action inside the Doctor's head. No, really. If you've read Timewyrm: Revelation you'll know what I mean. If you haven't go and read it. Probably after you've read the first three in the Timewyrm series though, which might be a while. It's alright though. I'll wait....

Excellent. That Timewyrm: Revelation stuff was good wasn't it. Bernice even mentions it in passing whilst everything is kicking off. There's also a mention of owls, which I think is the law when it comes to Paul Cornell Doctor Who Seventh Doctor stuff.

The Scourge can make humans do whatever they're told, which leads to some rather unpleasant moments and to enter our dimension they have to take over humans. This is also an unpleasant procedure. Painful.

It definitely has the New Adventures feel to it. The Doctor's devious as hell and punished for being so silly. It takes his friends to save him from himself, basically. Sylvester's brilliant throughout. From his smart-arse chess playing Doctor through to his full of doubt, almost broken, Doctor and back again.

The final scenes when the tables are turned on the Scourge are a victory for friendship, love, hope and faith. For humanity.

It's all rather good. Once more too the main cast get great support from other cast members : Michael Piccarilli, Holly King, Caroline Burns-Cook, Lennox Greaves, Nigel Fairs and Peter Trapani. Special kudos to Holly King though for a fantastic performance as Annie Carpenter who I think was my favourite 'guest' character in the story.

Anyway...well worth a listen. Especially - but not only - if you've read the New Adventures stories.

*An under-rated film if you ask me with. Go watch it and see if you agree with me.