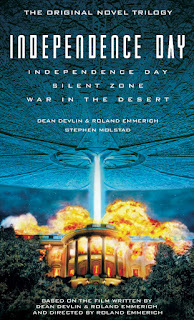 Relive one of the most iconic films of the 1990s with The Complete Independence Day Omnibus by Dean Devlin & Roland Emmerich and Stephen Molstad thanks to Titan Books...

Issued together for the first time to coincide with the release of the eagerly anticipated sequel Independence Day: Resurgence, The Complete Independence Day Omnibus combines three action packed stories, Independence Day, Silent Zone and War in the Desert all based on the 1996 film by Dean Devlin and Roland Emmerich.

Two days before Independence Day, the skies look as if they are on fire. All satellite communications are interrupted, as fear grips the cities of the world. When the skies return to normal, it become clear that a force of incredible magnitude has arrived on Earth. It’s mission: to eliminate all human life on the planet.

In the official prequel to Independence Day, Dr Brackish Okun, head scientist of Area 51, begins to suspect that a massive government cover-up has successfully buried all evidence of alien visitation throughout the years-a cover up in which Okun is now an unwilling participant.

War in the Desert

It is the fourth of July. Reeling from the enemy onslaught, a few surviving military pilots gather in the Saudi Arabian desert. Two of the best fliers discover that their recent ‘victory’ was an illusion-part of a secret ambush that will open the planet to unimaginable horror, unless several Middle Eastern nations can overcome long-standing hatreds and unite against aliens in the fiercest hand-to-hand combat of the war.