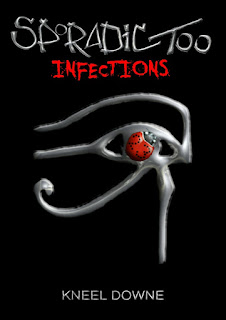 Romeo Kennedy becomes infected by the VirulentBlurb as he reads Sporadic Too: Infections by Kneel Downe...

Did you know that Kevin Costner has never seen a live Postman? All this and more in Sporadic Too: Infections.

The other day I was jotting down ideas in one of my notebooks. Some of them may come to be something, others may just remain fragments, but Kneel Downe has collected his notes and tweets and put them in an actual book, and this is the second time he has done it.

When I first started reading this book, the first thing I noticed was that Downe writes without fear. Without fear of being put in a box, his mind lets the words run free and everyone can come along for the ride. Sporadic Too isn’t like anything I have ever read before and was quite an experience, and at first I didn’t quite know what I was reading. But after a couple of pages I likened it to a mind altering literary intoxicating substance. Some of the notes, fragments, etc will stick in your mind and leave you pondering on meaning and the whys and wherefores a long while after.

Downe’s style is almost the result of what would happen if J.G Ballard and a Prog band wrote an album together. Yet it remains (to me) quite unique. Even being a slow reader as I am, there were times where I was speeding back and forth through the pages.

As Downe notes in his foreword, this collection is a lot more connected to his VIRULENTBLURB works and characters, but still works as a standalone. There were characters like Kurt Lobo who is a gene-spliced wolf/cop/man who I became quite fond of and reminded me of something out of the pages of 2000AD.

To say Downe has a way with words would be an understatement, in the past some of his twitterature (as the cool kids say) has really struck a chord with me and has made me try to approach some of my own work in a different way to varying results.

There are themes and motifs that I noticed recurring throughout Sporadic Too that connected the whole thing, despite being what is written in the foreword, infections being the main one. Yes there are parts (especially Infect1on) which focuses on a pathogen that has killed 77% of the population but the theme of a virus carries throughout in the form of other things i.e gods, monsters and rockbands in the same way as once quarantine is broken, all bets are off. Also I think he likes owls.

I enjoyed Sporadic Too in the way it plays with words and style but I also enjoyed it from the sheer imagery that a lot of Downe’s 140 character twitterature contains.

If you're looking for a read that has jumped clear of the box then this is definitely for you.