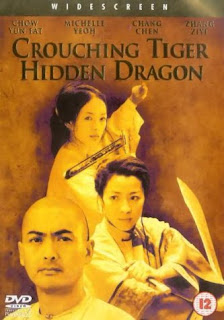 Susan Omand grabs a Crouching Tiger by the tail...

Crouching Tiger Hidden Dragon. Winner of 4 Oscars, 3 BAFTA’s and a Golden Globe and nominated for countless other awards. Heralded by the critics and hyped to the eyes as one of the most wonderful films in the world, like... ever. And yet, the first time I watched it, when it first came to DVD, I really didn’t get it. Couldn’t understand what all the fuss was about. Nothing. So, nonplussed, I wrote it, and director Ang Lee, off as “just not my thing”. Then, almost a decade later, once all the hype for another Ang Lee film had died down, I got round to watching Brokeback Mountain. Wonderful film! Seriously, seriously epic. Forget the hype and the very bad marketing angle. You have to watch Brokeback Mountain. Anyway, that got me to thinking, had I actually written off a director’s work on the strength of one film that I didn’t understand? So when today's theme was mentioned it seemed like a good time to try revisiting my Crouching nemesis.

Normally at this point in a review I tell you a bit about the story and the plotline but... I still don’t understand it. There’s something about a magic green sword (with a very wibbly blade) that gets stolen by ninjas, returned, stolen by ninjas again and returned again, a huge argument about a comb in the desert, which leads to a bad case of Stockholm syndrome, and a lot of wafting about in mid air. Really. That’s all I picked up from two hours of Award winning “brilliance.” And I promise you I did try.

So I did some research and analysed the film more critically. It turns out this is the film adaptation of the fourth book in a five book series, which explains a lot. This really does feel like a “middle film” in a trilogy or something. All the character building felt like it had been done in the first film that we didn’t see, and all the action is being saved for the final film that we’re never going to see. This was basically the “trek to get there” film. So that explains the plot a bit better, what about the “amazing effects” that one all the awards? The wire work is awful and, for the most part, unnecessary. I know it was something to do with the magic sword but why could only some of the people “fly”? And why, when they were “flying” was it not graceful and beautiful rather than actually looking like someone flailing around having been hoisted into the air on a wire. You only need to watch The Matrix, which was released the year before and choreographed by the SAME person, to see how it could have been done really, really well. And the wibbly swords meant that the lack of violence in the fighting, necessary in a good martial arts film for me, was very disappointing, with only one suitable killing resulting from what looked like a sharpened Frisbee to the head.

Then I read the interview with co-writer John Schamus and the director Ang Lee that was included in the DVD booklet and it all suddenly made a bit more sense. Crouching Tiger Hidden Dragon had been a pet project for Ang Lee for a long time, since he had read the book, originally from mainland China, which had made it out from that, at the time, closed country. It seems to me that this is a film made by a fan, what with the trendy historical content and the de rigueur “strong female roles” and he did it because he could, not because he had something to say about it all.

A single comment from Schamus in that interview then wrapped the whole thing up for me, when he said “We have always seen it as Sense and Sensibility with martial arts.” Oh god, really?

So, yes, I guess I may have missed something with Crouching Tiger Hidden Dragon. I may have missed a 19th century “classic” from another culture. However, I may also have missed the chance to become a sheeple and laud a film just because the critics went with it and it became something fashionable to like at the time. In either case I’m not going to watch it a third time to find out.