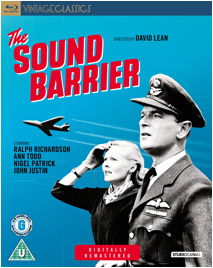 David Lean's 1952 classic The Sound Barrier is coming to DVD and Blu-ray on April 11th...

The Sound Barrier, David Lean’s 1952 powerful dramatic exploration of British attempts to achieve supersonic flight, achieved great box office success on release but today remains one of his rarely seen films. Thanks to a restoration by the BFI National Archive in partnership with Studiocanal, and to generous funding from the David Lean Foundation, this new Vintage Classics edition featuring brand new extras is released to mark the 25th Anniversary of David Lean’s death for a new audience to discover.

The film tells the story of John Ridgefield (Ralph Richardson, Doctor Zhivago, The Heiress), the self-made wealthy owner of the Ridgefield Aircraft factory. The far-seeing aviation manufacturer is driven toward a significant breakthrough, envisioning a plane that can fly faster than the speed of sound. His obsession with perfection mirrors Lean’s own, with the human cost of scientific progress sending Ridgefield close to madness and throwing his family into turmoil. Alongside Rattigan’s script, the film was famed for the breath-taking aerial footage and Malcolm Arnold’s terrific score.

At the heart of the film is the fascination of the era in which it was made with the thrill of aviation, an industry that had boomed throughout the war and held the world’s attention. The connection to aviation history in The Sound Barrier has lead to being acclaimed by critics on release as ‘semi-documentary’ such was the celebrated attention to detail. Lean obsessively researched media reports of jet engines attempting to approach supersonic speed, even going so far as to interview British aeronautic designers and managing to fly with test pilots. Eventually he turned over 300 pages of notes to acclaimed playwright Terrance Rattigan to turn into the screenplay for The Sound Barrier. While the sound barrier was actually broken by USAF pilot Chuck Yeager, this fictional account Rattigan produced honours British engineering and determination of men like Frank Whittle, at the very forefront of jet engine development. Indeed, it was part inspired by the life and times of Geoffrey De Havilland; the designer and owner of De Havilland Aircraft Company, two of whose sons died testing their father’s own experimental jet plane.

Rattigan’s much praised script was lauded for examining the relationship between obsession and sacrifice, technological mastery and the costs of pursuing it at the cost of all else.

The Sound Barrier went on to be celebrated by awards academies on release - triumphing over The African Queen, Rashomon, Singin’ In The Rain and A Streetcar Named Desire to win Best Film and Best British Film at the BAFTAs along with a Best Actor award for Ralph Richardson

· 10 minute excerpt from BFI interview with David Lean from 1959.