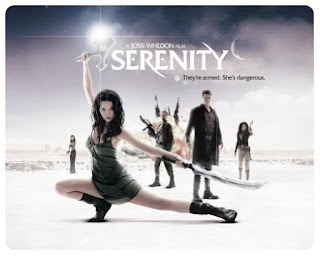 Our small band of Gunters here in The DreamCage universe are reviewing every film mentioned in Ernest Cline's Ready Player One. This week Nate McKenzie finds some Serenity...

Full disclosure: Firefly and Serenity have been on my "To Watch" list for quite a while but I've never made the time for them. Apparently, rewatching Community and Lost are more important. Rest assured, Whedonites, I still recognize his talent and will be bingeing on Firefly in the coming weeks.

Knowing next to nothing about Serenity (other than the fact that its fanbase is devout) I was able to gain a fresh insight into a universe that I've only heard of but never been privy to. If you're as unfamiliar as I was, let me enlighten you:

Nathan Fillion is Malcolm Reynolds, the captain of Serenity, a Firefly-class space vessel; the Doc Holliday of this space western, Mal follows his own path but his allegiance to his crew are apparent, if unspoken. His crew consists of badass-with-a-gun Zoe (Gina Torres), pilot and Zoe's mate, Wash (Alan Tudyk), dumb-tough-guy-with-a-gun Jayne (Adam Baldwin), and ship mechanic Kaylee (Jewel Staite), and eventually the return of Inara (Morena Baccarin) to the fold. I had to use my context clues here to come to the conclusion that she played a substantial role in the TV series as Whedon deftly alluded to all the history between Mal and Inara without a hand-holding review of her importance to the story.

Always on the hunt for the next job, Mal and crew pick up Simon Tam and his sister, River (Shawn Maher, Summer Glau) after Simon rescues River from the Alliance, who are conditioning her to be a psychic assassin.

The pleasant surprise for me was the appearance on screen of a personal favorite, Chiwetel Ejiofor. Even though Ejiofor's role as The Operative put him in the unenviable position of antagonist his presence gave a little more weight to a talented, but relatively lesser-known, cast. He fit the role primely with a calculated strength in his persistent chase to capture River and dispose of the Serenity's crew.

When pitching Firefly, Whedon described it as, "Nine people looking into the blackness of space and seeing nine different things"; that vision for the TV show was something that I would have liked to see play a larger part in Serenity but the constraints of a two hour run-time understandably left little room for exploring superfluous avenues. But that doesn't mean that the story or action were shallow. Rather, it was robust with nuance that both made sense to me as an unfamiliar viewer and gave me insight to inside arcs that made me want to watch the show: What happened between Mal and Inara that caused a rift? What did Zoe go through in her life that led her to develop that tough demeanor? And how did Wash land such a great gal? Were Simon and River part of the series in anyway or new characters?

Even if the film didn't answer these questions it didn't need to. The movie was just so damn enjoyable as a stand-alone story. Whedon also shows great maturity in the writing with the surprise death of one of the characters. (No spoilers here) A lot of movies will go out of their way to ensure they don't kill off a fan favourite but Whedon earns points for realism in a film about a fantasy world. That takes real commitment to writing a story that doesn't pander to its audience. With the tropes that are explored throughout Serenity the film should feel cliché but it doesn't; it is genuine and heartfelt - a homage to both the characters and the fans who fought for their return.

When I watch a SciFi film with great characters and a plot that draws me in I always wish for more back story to get to know the players better (but not with one of those contrived 'origin story' films). With Serenity, access to the back story is built in which lends to a more complete and engrossing world. I may not have been a fan before but I certainly am now.

Now, where do I sign the petition demanding a sequel series... or at least a spin-off that revolves specifically around Summer Glau?