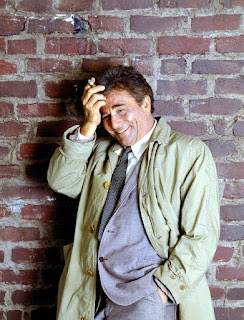 In a series of articles, Susan Omand and Steve Taylor-Bryant are going to remember the policemen, spies and criminal specialists that entertained them over the years. Today, Susan follows the clues with Columbo...

Imagine the scene. In the plush penthouse apartment/mansion/house in the hills, the rich murderer is being questioned about the heinous crime that has been committed. They have an answer for everything and it all seems to make sense. They think they’ve really gotten away with murder. The shabbily dressed detective in his trademark rain mac gets up to leave, seemingly satisfied of their innocence and apologising for taking up so much of their precious time when, at the door, he turns. “Oh, Sir, just one more thing...”

Yes, underneath that mop of tousled hair and hauled together suit, is the razor sharp mind of Detective Lieutenant Columbo of the Los Angeles Homicide Division, who then proceeds to pick apart the murderer’s fabricated tale piece by piece until there is not a shred of the story left for them to hide behind. But, of course, we know all this already because, as with every Columbo film, we are already aware of who the murderer is, having seen the grisly event and the argument leading up to it, at the very start of each feature length show. And that is one of the main things I loved about the Columbo films - because we find out at the start whodunnit and their motive, I can spend the film watching Columbo picking up on the clues and follow the police procedural through step by step. Usually, with detective shows, I have to watch them twice, once to get the “who and why” and then again to get the enjoyment of the investigation itself, which often doesn't stand up to scrutiny once you know who the perpetrator is.

Created by William Link and Richard Levinson, who were also responsible for (whisper it) Murder She Wrote, I was really surprised to find out that there have been almost 70 Columbo episodes made over a period of over 30 years (from 1971 to 2003). All were feature length and all starred one man as Columbo, the inimitable, and yet often imitated, Peter Falk, with his trademark expression due to his right eye being removed as a result of cancer in early childhood. I looked to see who the rest of the core cast of these films were, you expect there to be 4 or 5 regular players in a show like this and... there were none. According to the font of film knowledge that is IMDb, the next most regular cast member was only in 23 shows, and he was the crime scene photographer. So the Columbo TV series really was just all about Detective Lieutenant Columbo whose first name, incidentally, we never find out.

The plots of the shows all managed to tread that very thin line that many detective shows these days can't, between being not too obvious and spoon-feeding the audience but also not overly convoluted and difficult to follow no matter how ridiculous the scenario. I mean, Columbo investigating an apparent suicide of a reporter at a rave? Honestly? Apparently so in 2003 but still the clues were all there and Columbo did his “just one more thing” as perfectly as ever. Despite most of the shows having a different director/writer combination, the formulaic nature of the plot meant that you knew exactly what you’re going to get with a Columbo film. This is in no way a bad thing, as there was enough variety in the rest of it, scenario, cast and modus operandus, to keep them interesting and fun without being a taxing watch. Ideal for a weekend afternoon in front of the TV.

There have been rumours on the go for a couple of years now about bringing the character back for a new film/reboot/remake and I have only two words to say about that... Mark Ruffalo.