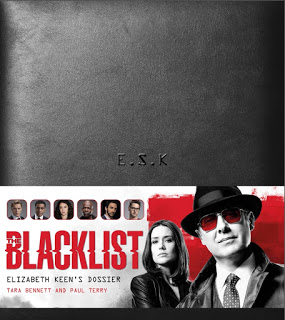 Steve Taylor-Bryant discovers the names on Red's Blacklist and more secrets of the FBI as he reads the companion book to the hit TV series, The Blacklist: Elizabeth Keen's Dossier thanks to Titan Books...

Do you remember those great days when DVDs were first released? You got the film and hours of behind the scenes or other featurettes for your buck. Nowadays you just get the film. If you want the extras, you have to buy the 19 disc Multi Director Studio Chief's Cousin's Cut, then you have to be arsed to go through the 7000 trailers to get to what is essentially just the pre-release marketing stuff.

Luckily a new version of these extras for films has become popular but in book form. The "Art of" or a tie-in novel are all the rage now and, to be fair, most of them are very good. Now these styles of books are branching into television shows and I welcome them with open arms. When you truly love a show you want to own everything connected to it and it's been a long time coming to get quality products to accompany your show of choice. Step forward Titan Books who, once again, prove to the world that they are the leaders when it comes to companion items for film and television. When it comes to film they can't be beaten on their array of wonderful books but now their TV show stuff is every bit as impressive as well.

You might not like The Blacklist as a show but when it comes to The Blacklist: Elizabeth Keen's Dossier, trust me, it doesn't matter as you'll want something like this for any show you do like. What could have been just a scrapbook, albeit a great quality one, is actually a treasure trove of beautifully presented show related information. From the stunning leather effect cover with Keen's initials embossed to the different and relevant sections throughout the book, what you get is true love for the show from its authors, Tara Bennett and Paul Terry, who have obviously put a lot of time and talent into the book. This isn't some small titbit-filled glossy supermarket book this is 160 odd pages in full colour of in-depth analysis and information that, as a fan of the show, I lapped up and found myself returning to as I flicked through the pages whilst watching the episodes.

As a fan of The Blacklist this is an essential own but, even if you aren't as enamoured with Red and Keen as I am, it's still important to look at as this is for sure the future of television tie ins. Every single show of note deserves a book as glorious as The Blacklist: Elizabeth Keen's Dossier.

Remember you can WIN a copy of The Blacklist: Elizabeth Keen's Dossier if you enter our Competition.