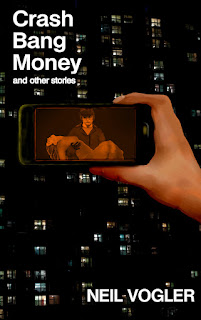 There's something lovely about short stories. A thousand odd words takes no time at all to read and so are convenient in this hectic life we live in but it's more than that, it's a showcase for a writer's talent. They have to start a tale, grip you, describe what's happening and then end it leaving you wanting more. That takes true talent to do over the course of a novel let alone about a page and a half! Then, if you are releasing a collection of short stories, you have to enough content to warrant the cover price and this brings its own problems - you've got to be gripping now for another twenty some stories and show variety because your audience won't want the same thing page after page. As a reader I'm in awe of authors that can achieve this feat. Which brings us to Neil Vogler.

I became a fan of Neil's last year when I finally read his sci-fi espionage thriller Tripler (review here) and then stalked him until he agreed to use his journalistic skills to write for this very site. Then came a problem - he writes other stuff and I want to review it but he writes for this site. I'm just going to have to ask you to trust me when I say my critique of Neil's work will be the same as for people's who haven't yet bent to my will and drifted into our team.

I wanted mainly though to see if the hooks I enjoyed from Neil's long form work translated into his shorter ideas and, with twenty five stories in Crash Bang Money, I'd certainly get the chance to see. The first and possibly most obvious thing to state about this collection is that it hits the right notes to fulfil the expectations explained above. It has variety aplenty but also themes. Throughout the collection the Seven Deadly Sins are all covered but in individual stories that entertain albeit in a twisted way. Honestly you have to read Neil's take on lust, The Phunker, to see that the author can definitely think outside the box and offer something new and yet perverted on an age old trope. Some stories flow into each other and ex-child star, Matthew Malarkey, gets three stories that take you as a reader on quite the roller coaster ride, and some entries are letter-like in form with a fantastic reference for a person seeking employment and a letter from a father to his young son that, whilst it had conspiracy undertones, was shockingly beautiful and made me weep.

Some stories inspired thoughts in me that I had to pass on to Neil. His take on espionage in Meeting Between Two Rival Intelligence Agency Operatives made me want Neil to write more spy oriented work, as he has a genuine skill in purveying what modern spying needs to be, and one of the sci-fi entries, The Register, introduced a character with real Philip K. Dick style that I would love to see in the novel format. Add in stories about everyday items like an aubergine and a bottle of tomato ketchup and you'll get a real understanding that Vogler's mind doesn't work like most people's, which leads to fascinating storytelling you won't find elsewhere. Another theme that runs through many of the stories, whether intentionally or not, is voyeurism and, if I'm ever in a position to get Neil Vogler a very good shrink, I think his ability to sneak into people's life or stalk them with the ease that comes across on the page is certainly a conversation that the doctor would want to have with him.

With convention turned on its head, classic sci-fi and modern technology moments and scary insight into criminal minds, Crash Bang Money is an essential own. It entertains the reader and showcases writing talent with aplomb.