Book - Firefly: The Gorramn Shiniest Dictionary & Phrasebook in the ‘Verse 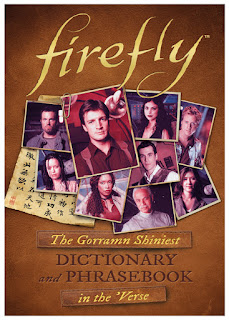 Tony Cross sorts his dockit from his foxhole and reads Firefly: The Gorramn Shiniest Dictionary & Phrasebook in the ‘Verse by Monica Valentinelli and Titan Books...

Sometimes you get asked to review something about which you realise there is very little to say. That’s not because it is awful but because it effectively does what it does neatly and effectively.

I don’t know who at Titan Books decided the world needed a Firefly Dictionary & Phrasebook but that’s what they produced. It’s a tidy, well-packaged and well-produced little tome. There’s good use of photographs, which makes sure the whole thing doesn’t feel like a serious academic book.

Inside you find a Firefly dictionary, which covers both Firefly specifics such as characters, planets and slang as well as more bog-standard words. To give you an example from the M section, which I randomly selected we have:

Moon, n. 1. Celestial body that orbits a planet. n. 2 Serenity’s bulbous tail end, the sight another ship would see as she flies away.

Moon brain, n. sl. Babbling idiot or fool. Lunatic. Durran Haymer referred to himself as a moon brain after he saw his missing wife, Yolanda, in “Trash”.

I do wonder why they felt the need to include Mortar – and other similar words. Indeed, it brings me on to an issue about this book in general: who is it aimed at? The Firefly newbie who might need guidance through the new ‘Verse they’re exploring or the longer-term Firefly fan who wants to know more about language use in the ‘Verse, in particular Chinese in Firefly?

Personally I found the Chinese material more interesting than the Character profiles, which are brief and without much that we don’t already know plus a quote or two, which is why I wonder why a longer-term Firefly fan would want or need this book.

I’m actually still finding my way through the ‘Verse so dipping in and out of it was mildly useful when watching episodes.

In the end this isn’t an essential book for the Firefly fan but a ‘nice to have’. It’s the sort of book that Doctor Who used to specialise in with the disadvantage that Doctor Who has hundreds of episodes to draw on but Firefly doesn’t. Perhaps a similar book one day but with a bit more depth with the help of Mr. Whedon himself might be the way forward. That gives us a little more insight into the ‘Verse and the people that live in it.

In the meantime though this is a nicely produced book for your shelf but possibly of more use to a newbie like me than a long-term Browncoat.