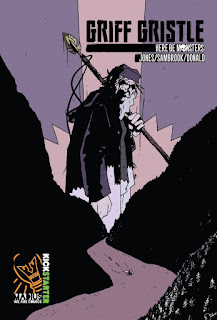 Susan Omand heads for a life on the ocean wave as a Crusty Fisher Punk and reads Madius Comics’ latest offering, Griff Gristle: Here Be Monsters...

I’ll be honest, I was expecting to write this review as a way to encourage you to throw some money at the Madius guys to get their crowdfunder for Griff Gristle a little closer to target but here we are, a scant 24 hours after their Kickstarter kicked off and they are fully funded to their initial target already and well on the way to attaining stretch goals. Wow. Ok, even for the genius of the Madius crew, that’s impressive. Let’s see what all the fuss is about then.

Something horrible is afoot in the sleepy fishing town of Charlsberg. Disappearances, strange lights and the town's slow death all point to otherworldly goings on... Enter fisherman, mystic and all round spectral asskicker, Griff Gristle. Aided by Justine, the sister of one of the missing, Griff must track down the source of these disappearances and finds a lot more than he could ever have bargained for. Coupled with the first story of Here Be Monsters in issue one is the short, "Love Story" which sees Griff face up to a ghost from his past...

The first thing that strikes me is the colour palette used by artist Rory Donald. Not for him the vibrant primary colours or stark black and white that you normally find in comics. Instead we are presented with gentle pastel colour blocks with heavy black shadowing that is very easy on the eye as well giving a wonderful atmosphere to the story from the start, making the stylised artwork both comforting and highly unsettling at the same time. I didn’t even know that was possible! The subtle faces in the swirling mists that engulf the first boat, before we even get to the title page, cannot be unseen, it’s giving me the shivers just thinking about it, and even the layout of the panels is much more interesting than the normal linear boxes. I also love the characterisation of the fishermen. Having spent a lot of time in coastal fishing villages, I think I’ve met more than my fair share of trawler-men and both the look and the attitude are spot on. There was only one thing I had a bit of an issue with on the design of the comic and that was black writing on the rich purple background chosen for some of the dialogue boxes which, on my screen (I’m reading a digital review edition) was quite difficult to read but I’m sure this won’t be the case in the printed work.

Enough about how wonderful the comic looks, what about the story itself, written by the Madius dreamteam of Robin Jones and Mike Sambrook?

The tale is timeless, or at least it could be if it wasn’t for small mentions of things like Michael Mann films or Hurricane Katrina that ground the story in a definite timeframe. Whether or not this is a good thing I’m not sure. However, I digress. Billed as a supernatural thriller it is both suspenseful and disturbing in all the right places and the ghostly goings on felt like they had a lot of basis in folk tales, with standing stones and trapped souls, making it all believably familiar without becoming clichéd. I was very pleased that the events weren’t over-explained so the reader is allowed to accept their own version of what actually happened and I thought it was a really neat touch to use lettering of a different language for the spells that Griff incanted. Oh and “CHOOOOM” is now my favourite supernatural explosion noise.

As a first comic in the series it was a good introduction to the characters, with Justine making a good co-star for this story and being far more useful and practical than a lot of companions, actually helping out rather than being the wisecracking, interfering nuisance or wafting damsel in distress that she could have been. The epilogue too was much more than just the billed “love story” as it built a lot of the backstory for Griff while also setting into play what could become an intriguing long story arc.

As with everything Madius do, there’s a good level of clever observational humour in the dialogue and the little comments at the top of the pages between scene changes are not to be missed – some of them are laugh out loud funny. But the thing that hit home most for me with Griff Gristle is the man himself, which I know sounds an odd thing to say. Griff is a man that’s lived a life and knows its stories, seen things, done things, loved and lost. Nothing fazes him, nothing surprises him any more and yet he doesn’t seem jaded, just sometimes melancholy, and he is still up for some adventure. To get that amount of humanity into a character in 36 pages of a comic takes great skill.

So yes, you DO still need to throw some money at the crowdfunder. Why? Because, after reading this comic, you’ll want definitely want the Madius team to create more Griff Gristle.