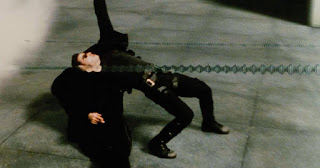 Our small band of Gunters here in the /G-f universe are reviewing every film mentioned in Ernest Cline's Ready Player One. This week Jayson Kristen enters The Matrix...

It’s no secret, I’m convinced the Wachowski Brothers are Willy Wonka and The Matrix is their everlasting gobstopper. As one of my all time favourite movies, The Matrix makes us question the nature of reality, our own self limiting perceptions and if Carrie-Anne Moss was the only woman cast who could fit inside a fifteen inch leather trench-coat-onesie.

In case you didn’t know, The Matrix takes place in 1999, and follows the journey of a full time corporate slave, named Thomas Anderson (Keanu Reeves), who moonlights as a master computer hacker code named Neo. As Neo begins to question the nature of reality, he is contacted by a mysterious “terrorist” known as Morpheus (Laurence Fishburne) who claims to know the truth Neo has been searching for. Not knowing he’s been under surveillance, Mr. Anderson goes to work and finds himself trapped and captured by Agent Smith (Hugo Weaving) who knows he’s been in contact with Morpheus. Agent Smith threatens Mr. Anderson/Neo and offers to wipe his record clean if he aids in capturing Morpheus. After a strange series of events, Mr. Anderson wakes up in his bed not knowing if what he experienced actually happened. Once he is contacted again, Neo decides to meet with Morpheus who offers him a simple choice: Remain ignorant of the truth and go about life like nothing ever happened or take a life altering drug that will open his mind and cause him to tumble down the rabbit hole until he finds the answers he’s searching for.

I have to admit, the first time I saw The Matrix was a bittersweet. It was the winter of 2002, in eighth grade, and the first time I had ever experienced a migraine. We received a heavy snow the night before and school was cancelled, so naturally, my friends and I spent all day sledding down a giant hill and breathing through our mouths. When I came home my body and head ached so bad I couldn’t move without feeling ill. I lay on the floor and writhed while The Matrix played on TV. At the time, it was the only thing I could focus on that took away the pain. Well until the shooting scenes and bright lights of course. But after watching it for the first time, I thought, “What the hell did I just watch?” and I really didn’t know until I saw it about five more times. The Matrix was the first catalyst that opened my mind to the concept that everything we believe may just be an elaborate illusion. I attribute this film to changing the way I think about life and distancing myself from the “This is the way things are” crowd that sheepishly wanders the Earth searching for material happiness. I suppose some people have The Bible, I had The Matrix.

From a film perspective, I’m most impressed with the ability of The Wachowski’s to hide a deep philosophical chewy caramel centre inside a chocolaty action film shell. That’s what makes The Matrix such a treat. A movie that wrestles with the concepts of Free Will, Virtual Reality, Artificial Intelligence, Self Deception and The Search for Truth all masked by impossibly fast karate and bullet dodging madness.

The Matrix is a true heroic epic and is a must see for anyone who wishes to open their mind to the potential of greater realities. I will warn you however: It’s weird. It’s very weird. And it’s amazing. People who have seen The Matrix typically fall into two categories. One who recoils at the concept and goes back to watching romantic comedies, Twilight or Michael Bay films while the other watches it over and over again until it makes sense and changes the way they see the world.

When The Matrix first came out, people didn’t have cell phones or GPS. Dial up internet was considered high speed and Seinfeld had just ended. Virtual Reality and AI were still distant Sci-Fi fantasies that seemed as crazy as holding a virtual assistant in your hand that tells you where to hide a dead body. Shit, I remember my dad bought a brand new 43 inch box TV for over $2,000 and was excited because it was “HD Ready!” (By the way, “HD Ready” means...NOT HD.) Back then the internet was still just for porn. Cats hadn’t even made their grand entrance yet. It’s no crime that a deep philosophical action movie such as this received so much negative feedback from the masses as it was way ahead of its time. But if it’s 2016, or later, and you haven’t seen The Matrix, call up that deep philosophical friend you always neglect and make time to see it now. Because whether you know it or not...The Matrix has you.

All scenes that take place within the Matrix have a green tint, as if watching them through a computer monitor, while scenes in the real world have a blue tint.

Will Smith was approached to play Neo, but turned down the offer in order to star in Wild Wild West (1999)