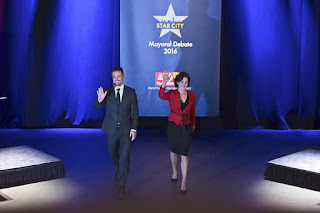 Ahead of this week’s new episode Steve Taylor-Bryant catches up with the Mayoral campaign in last week’s Arrow, Code of Silence...

Oliver Queen and Ruve Adams meet at Debate prep and exchange pleasantries whilst Oliver is secretly trying to tie her to Damien Darhk. TeamArrow trail her limousine but she loses them before reappearing in time to attack Green Arrow. The team come to the rescue whilst Ruve gets away. Oliver may not be seeing Darhk’s plan clearly but Darhk is pressing ahead anyway, telling Ruve about Oliver’s son, William, the information he got from Malcolm Merlyn who is now part of Darhk’s inner sanctum. The important people involved in Darhk’s plan are all meeting to discuss phase 5 of the Star City project which will mean they have to control City Hall. Some are questioning if Darhk’s wife has what it takes to grab control, which Darhk punishes with death for even asking the question. Darhk wants Captain Lance taken care of.

Oliver and Felicity arrive home to find that Donna has started to go overboard with their engagement party plans and the apartment is filled with balloons already. During background checks into the two Mayoral candidates, Thea has found a cheque for $1million written to a Samantha Clayton but never cashed. Oliver tells Thea it’s nothing. Laurel is not letting her father out of her sight and, when he is called to a possible burglary, she attends the site with him. However it is a trap and the building starts to collapse with the Lances barely getting out alive. Back at the station Quentin wants to protect Donna so makes up an excuse about a gambling debt for his cuts and bruises. Donna has been with liars before and knows that Quentin is hiding something from her so breaks off their relationship because he won’t trust her so she can’t trust him.

Felicity has found out that the burglary call came from HIVE and has an address for TeamArrow which they go to immediately. The HIVE operatives escape leaving the building to be demolished and again the team are lucky to get out, especially Speedy who went to retrieve a HIVE laptop. Donna is really upset about Quentin lying to her and tells Felicity how lucky she is to have the relationship she has with Oliver who is meanwhile telling Thea all about William and how he has been made to promise he won’t tell Felicity by Samantha or he can never see William again. Felicity needs to know what is on the stolen laptop and asks Curtis for help who struggles to hide the fact that he is working on an engagement present for Felicity.

Curtis discovers that the laptop contained blueprints for the very building they are all in for the debate. Thea sounds the fire alarm to evacuate the building whilst TeamArrow try and stop the HIVE terrorists from blowing up the building. After a fair bit of fighting the bombs are stopped and Quentin, who has come out of hiding, arrests the HIVE operatives allowing the debate to continue much to the disgust of Ruve who then loses the debate to Oliver. Back at the party, Quentin comes clean with Donna about his past involvement with Damien Darhk and why he lied to protect her and Laurel. He is forgiven and the relationship is back on. Curtis presents his gift to Felicity and Oliver – some tech that, when inserted into Felicity’s spine, will let her walk again. Damien Darhk is at home and introduces his daughter to their new house guest, a boy called William.

Solid storytelling again this week. Whilst Code of Silence won’t be looked back upon as a pivotal moment in the show, it was nice to address the things that often get missed in comic adaptations. Secrecy is a big part of all the comic characters and is often forgotten or not well covered in screen adaptations so to have an entire episode confronting the trust issues and secrets in everyone’s lives was refreshing and it allowed a more human moment to occur. Elsewhere we find that Darhk’s plans aren’t always going to work as Oliver and his cohorts thwart the bombing of the campaign. We see Malcolm Merlyn now nicely attached to Darhk’s villainous plot and William is about to become the major plot device we all thought he would a while ago, which brings us nicely back to the one secret left to tell, between Oliver and Felicity and the existence of a son.