TV - The Hollow Crown: The Wars of The Roses 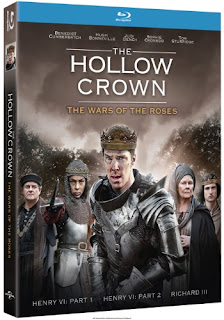 Benedict Cumberbatch and Dame Judi Dench bring Shakespeare to life in BBC's newest instalment of the critically acclaimed series, coming to DVD and Blu-ray in June...

The highly anticipated sequel to the BAFTA winning historical 2012 series, The Hollow Crown: The Wars of The Roses comes to Blu-ray and DVD June 21st, 2016 from Universal Pictures Home Entertainment. Coinciding with the 400th anniversary of William Shakespeare's death, the three part sequel series features star-studded adaptations of Shakespeare's most celebrated plays, which have captivated audiences with their gripping tales of power and politics.

Produced by Academy Award winner Sam Mendes (American Beauty, Skyfall) and directed by Dominic Cooke (The Crucible), this epic production is a breath-taking vision of four of Shakespeare's most acclaimed historic plays. Revealed in three parts, The Hollow Crown: The Wars of The Roses allows audiences around the globe to celebrate the playwright's first tetralogy: Henry VI Part One, Henry VI Part Two and Richard III, as some of the most revered Shakespearean actors of our time chronicle the twisted sagas of these historical kings and how their reign forever changed history.

Featuring an outstanding ensemble cast, The Hollow Crown: The Wars of The Roses stars some of the UK’s finest acting talent, including Hugh Bonneville, Benedict Cumberbatch, Judi Dench, Michael Gambon, Keeley Hawes, Sophie Okonedo and Tom Sturridge. The drama mini-series will also be shown on BBC Two as part of the BBC's Shakespeare celebrations, however with the DVD and Blu-ray, viewers will be able to fully immerse themselves in the riveting world of Shakespeare with a run time of over 6 hours and bonus features including an exclusive behind-the-scenes featurette and deleted scenes.