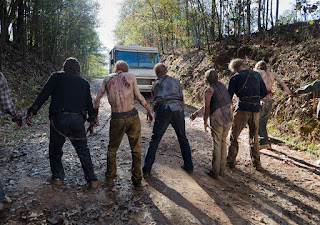 Alwyn Ash looks back over the series and surviving "that" ending in Season 6 of The Walking Dead (with spoilers)...

I’ve never been much of a comic reader. Certainly never Marvel or DC, and very rarely anything else. In 2003 I was not even aware of a publication featuring walkers, but come 2010 and “Rick Grimes” is a name I’ll never forget. For the past six years I’ve watched both him and his “family” face their worst nightmares, fight off zombie hordes and battle against ruthless fellow survivors. In a world devoid of law, the stakes are high. I’ve had my heart broken often as those I grow to care about are killed, starting with poor Sophia Peletier and including Mika Samuels, Beth Greene and her father Hershel. It’s a cruel world that belongs solely to those strong (and lucky) enough to survive. I would have died on Day One.

The finale of Season Six, Last Day On Earth, recently aired in the US and it gave us a rather gruesome cliffhanger: new character Negan, leader of The Saviors, bludgeoning one of Rick’s people. Unless it is Rick himself who is the victim? Gasp! “Eeny… meeny… miny… moe.” Much of the season has been devoted to introducing both Negan and his baseball bat covered in barbed wire (which he lovingly named “Lucille”) but by the end of it all critics and fans just weren’t happy, one critic even stating that fans were “cheated” by the episode’s ending by not revealing who had been killed. Those who read The Walking Dead comics will know that it is Glenn who dies, in print – however, the TV series often deviates from what has gone before by changing the fate of established characters, so on screen anything is possible.

Personally I enjoyed every minute of the finale and am looking forward to Season Seven. I don’t understand the dislike or criticism for Last Day On Earth; isn’t a cliffhanger supposed to be part of the excitement? Perhaps I’m well trained, seeing as I lived through the years in which Doctor Who ended story episodes with such a device, keeping fans waiting for a whole week until the plot could continue, or be resolved. OK, perhaps with The Walking Dead we’re expected to wait a little longer than seven days, but does that really matter? Star Wars fans bit their nails for three years before they finally got to see the fate of Han Solo and his eventual escape from his carbonite prison after the events of The Empire Strikes Back. Three years?! I’d have fingers thoroughly chewed! I’m certainly not considered a patient person.

Whatever happens in the next season, I’m just hoping they don’t kill off Maggie – Lauren Cohan is a talented actress and a great asset to the show, it would be criminal to lose her; and how can the producers even consider allowing the last of the Greene family to die? In the meantime, AMC has given us a second season of Fear The Walking Dead to feed our hunger for flesh. (No? Just me with a rotting zombie inside then?) And unlike the battle-hard heroes of TWD, now we watch as these fresh-faced survivors learn hard lessons.

I’m a huge fan of Dead Calm, so Dead Calm with zombies is just too much of an exciting concept to ignore. For those who don’t know, Phillip Noyce’s 1989 thriller is set entirely on a yacht. There is something both appealing and disturbing about the ocean, an unpredictable giant with a deadly embrace. It also gives us the opportunity to encounter pirates, so plenty of jokes ahead, me hearties! And, if they’re bringing into the mix a Titanic-style setting...

Altogether now: “Every night in my dreams...”