Audio - Doctor Who: The Marian Conspiracy 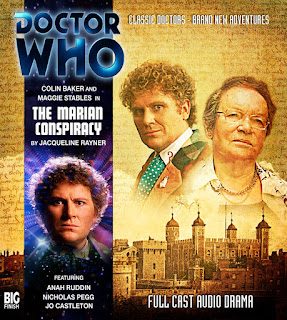 Our Doctor Who audio expert, Tony Cross, delves into the back catalogue available from the Big Finish website. Today is the Sixth Doctor and Evelyn Smythe adventure, The Marian Conspiracy...

Here's a thing...I thought I'd love The Marian Conspiracy. It's a historical themed story, it's the Sixth Doctor and it's Big Finish.

It's not a terrible story. It's just not my cup of tea.

Let's take the positives first. Colin Baker's brilliant. Big Finish have really bought out the best in the Sixth Doctor showing what could have been done if the BBC hadn't all but given up on Doctor Who in the mid-eighties. He's particularly good both in the first episode when he goes head-to-head with Evelyn Smythe and in the later episodes when he's so patient and (surprisingly) kind to Mary.

That nicely segues into the next good thing: Evelyn Smythe. Evelyn is a fifty-five year old history professor - or lecturer - and the Doctor is drawn to her as the centre of a temporal problem, which turns out to be related to events back in 1554. The first episode that basically revolves around Evelyn and the Doctor meeting up. The Doctor is in one of his lightly confrontational moods and appears to be a borderline lunatic to Evelyn to begin with. After all his talk of temporal nexus points and time travel plus his arrogance isn't the best way to introduce yourself to a stranger.

Maggie Stables plays Evelyn and she's magnificent. Her unwillingness to be verbally pushed about by the Doctor, her intelligence and wit make her an endearing addition to the Big Finish repertoire. It'll be fun to see how she and the Doctor work out together. And it is nice for the Doctor to have a companion outside the usual 18-25 female demographic.

Evelyn's also rather good when she first finds herself mingling with the genuine citizens of 1554 England, even if she blunders in to political trouble (and genuine danger) almost immediately. Her compassion for and interest in some of the minor characters is lovely too. Those people who are forgotten in the warp and weft of History with a capital H. Those people that professional History tends to lose because they leave almost nothing in their wake.

You might think that one of the themes of this story is how history writes the past from the top down. Often. And how little we can know - or do know - about how ordinary people felt about the great religious questions of Tudor England. As their religion changed and changed again and changed again. These were difficult times.

Actually now I've got to this point I'm beginning to feel like I enjoyed this more than I thought I did. There's some meaty stuff in here: on religious freedom, on fear and on power. It's political and domestic. Although the domestic affairs of Queens are also the political affairs of state.

Hmmmm, it's weird this re-writing of my feelings about this story as I go.

I still felt a little distracted by the end as if my attention wasn't fully on the story, which means I was probably a bit bored at points. I'm going to blame myself and say it's too much exposure to Tudor-Stuart history at University.

The performances are all pretty good. I like Anah Roudin as The Queen and Jo Castleton as Lady Sarah in particular.

So after all that perhaps I can be more positive in general. It was never a story I thought was terrible, just not one that I got grabbed by and even with all the equivocating above it is still not a story I'd be eager to listen to again.

At least not for a bit.