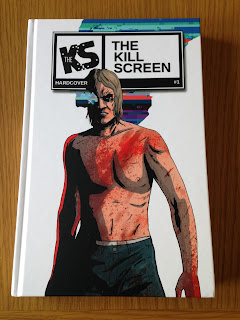 Susan Omand reads The Kill Screen collection from Mike Garley and waits for her phone to explode...

I’ve been following the work of Mike Garley for a while, ever since I was lucky enough to meet the man behind The Kill Screen a couple of years ago at Nottingham Comic-con so, when I heard that the comic series was being made into a hardback collection, I jumped at the chance of reviewing it.

Set two years after a cataclysmic technological event known as ‘The Kill Screen’, a computer virus now infects anyone who comes into contact with it via technology, phones or wi-fi.  Humanity is left on the brink of extinction, caught in a fight against the virus and each other, as sides start to band together – those infected with the virus lose their humanity and join with either the Blue Team or the Red Team, locked in some kind of technological deathmatch with each other, with those still uninfected by the virus, humans, left to fight for survival. The main story in the comics follows Chris and a team of human survivors as they both track and are tracked by a tech-created leader, CAT, and his followers after meeting up with two more humans, Max and Elle, and attracting more attention than they should. 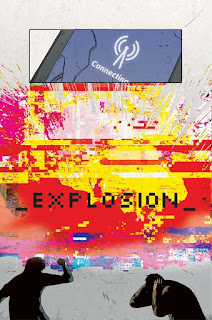 First published in 2014, I think The Kill Screen story, written by Garley, was ahead of its time as it’s only now that a gaming/AI/tech/reality crossover idea is becoming popular, especially in independent films. The difference here is that, instead of computers taking over the world themselves, technology is using humans as a conduit. Various reviews I read of the comics at the time tried to pigeonhole it as sci-fi, horror, action thriller but to my mind the story is far more social comment than any of that, hugely character driven, with an impressive diversity within the group of human survivors. Whether or not that is intentional I don’t know but it is handled incredibly well and pushes a hugely positive message by making the physical, sexual, racial and other, usually discriminatory, differences between people inconsequential to their infection or survival. I also get a strong political undertone from the story, in the same way that you get from classic dystopian work such as 1984 but that may be me reading too much into it. Joshua Sherwell’s art in the comic too is utterly unique, using vivid pixelation to represent the virus itself as well as recognisably tech symbols, such as wifi connectivity, pause symbols and such to lift the comic away from the norm.  I also really loved the small details, like the fact that a health bar was measured in cigarettes smoked, how a page was panelled in the form of Tetris tiles and I must admit I was caught out by the “loading screen” circle at the start of the collection - as I was reading it as a pdf on screen and actually waited to see if a page would load. Fair play guys, fair play. Even the lettering in the comic, done by Mike Stock, adds to the story, with changes in colour (for example Followers is always in blue and Unfollow is always in red) and typeface (CAT speaks in a digital looking typeface) changing the voices and atmosphere in my head as I read. 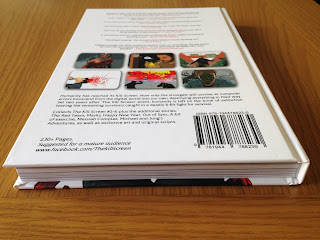 So what if you bought all four The Kill Screen comics when they originally came out, why should you buy this collection as well?  Because of all the extras! There’s so much more here than just the brilliant comics, which only take up half the massive 230 plus pages in this collection. Not only is there the very clever Foreword from “TV and films’ James Moran” which really sets the tone for the collection, there are seven, yes SEVEN, additional short comics all based around the characters and events in the main comics. From a one-sheet New Year page featuring the team, through the almost “buddy movie” of Michael and Jung’s Adventure to the poignant inevitability in the prequel, Red Team, there is something for every facet of The Kill Screen universe. Away from the comics style, there’s also a section of written work including scripts, including the comic scripts themselves, notes from a proposed novel, the start of a screen-play and other pitches. There’s also a LOT of extra artwork, with all the original and alternate covers, concept art, character studies, storyboards and guest pin ups, including a gorgeous one from Death Sentence London artist Martin Simmonds.

Order the book direct from Mike at http://mikegarley.bigcartel.com/product/the-kill-screen-hardcover-collection-coming-soon
Email ThisBlogThis!Share to TwitterShare to Facebook