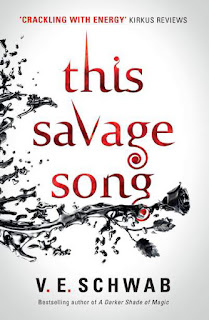 Titan Books announce the start of a brand new series from the internationally bestselling author of A Darker Shade of Magic, V.E. Schwab, This Savage Song...

Kate Harker and August Flynn never should have met. They live in opposite ends of Verity, a grisly metropolis where evil deeds breed literal monsters. Violence creates clawing Corsai; murder summons bloodsucking Malchai; and the most terrible atrocities create the mysterious soul-­‐stealing Sunai.

One side of the city, ruled by Kate's father, Callum Harker, has struck a devil's bargain with the monsters. The other, led by August's father, fights them. The thin truce that keeps the Harker and Flynn families at peace is crumbling, and August is sent to spy on Kate.

But when Harker’s own men try to assassinate Kate and pin it on the Flynns, August finds himself at a crossroads: let his family be framed for her murder, or save the life of his father’s enemy? August and Kate quickly find themselves running from both sides as they try to stay alive long enough to uncover who wanted her dead, in a city where no-­‐ one is safe and monsters are real...

V.E. SCHWAB is the author of the Darker Shade of Magic series, whose first book was described as “a classic work of fantasy” by bestselling author Deborah Harkness. It was one of Waterstones’ Best Fantasy Books of 2015, The Guardian’s Best Science Fiction novels, also a Telegraph choice for the Best Young Adult Books of 2015, and Book of the Week for We Love This Book.

She is also the author of Vicious, which was a Publishers Weekly Best Book of 2013, an Amazon Best Book of the Year (as well as Best Book of the month when it debuted in September), a semi-­‐finalist in the Goodreads Choice 2013 Book Awards, and the ALA top pick for Fantasy for their 2014 reading list. This Savage Song is the first in her Monsters of Verity series.