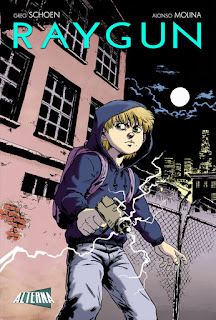 The appliance of science, as Susan Omand has a blast with Raygun #2 from Alterna Comics...

When we left our intrepid hero, young Matthew, at the end of issue 1, he had just accidentally blasted a hole in the wall of the California Science Centre using a ray gun invented by Nikola Tesla himself, alerting the authorities and setting into motion a chain of events first set up over a century before.

We pick up the story as Matthew heads home just as the sun comes up and collapses on his bed after a long night, only to be woken seconds later by his father, ready to take him to school. Ignoring the bullies who had locked him in the cupboard at the exhibition in the first place, Matthew talks to his new friend Rupert and asks if he wants to see “something cool”.

Meanwhile at the Pentagon, the suits and the boffins have gathered to work out how to deal with the situation when they’re not exactly sure what has happened, just that they need to act on the message they received and try to reverse engineer the technology used.

In the playground at break time Matthew shows Rupert the raygun and they take turns at shooting tin cans with it; only, when Rupert goes to shoot with it, it stops working. After school, Matthew heads home to find his father in his workshop as usual and they talk about Nikola Tesla, his fantastic inventions and ideas and incredible lack of business sense which resulted in Tesla losing out on most of his patents. Matthew tries to ask about the death ray but is soon distracted by pizza.

Back at the Pentagon the various agencies have reached a consensus on how to proceed and makes a phone call but Matthew, unaware of their plans, heads out again that night to see what the death ray can really do...

Another great story in this issue, carrying on the long story arc very well but also providing plenty of excitement in itself. Schoen has again surpassed himself on building interesting characters that you can engage with on many levels, from the confused bureaucrats and (I’m sure) evil scientists at the Pentagon to Matthew’s genial and genius but scatterbrained inventor dad. The story also manages to convey some historical information about Tesla without feeling like it has been shoe-horned into the story and the natural discussion between Matthew and his dad about Tesla is the way everyone should learn about stuff – by asking questions, having discussions and getting intelligent answers that they can understand. But it is again Matthew himself that I find myself rooting for, not knowing quite what he’s got himself involved in but never one to shy away from finding out. The artwork really adds to the characters too with a certain reality to the surroundings while still maintaining an action comic feel. I mentioned last time that there was a slight Manga feel to the art and that remains true with Matthew’s expression in a gang shootout scene near the end of this issue being straight out of Akira.

I’m really looking forward to seeing what happens next now that Matthew realises the power he has in the raygun. 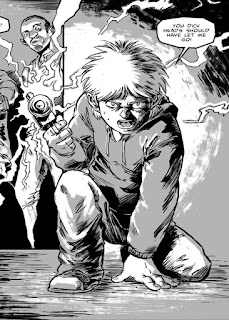