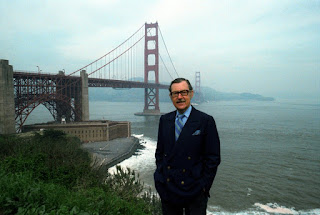 Spanning the entire career of the pioneering investigative TV journalist, the archives of Alan Whicker have been donated to the BFI...

The collection contains meticulous records of one of the most enduring and influential careers in British television history, spanning the late 1950s into the 21st century, covering the entire career of the world-renowned broadcaster, and represents a unique insight into the production methods of a master documentarian. Alan Whicker’s name is a by-word for brilliantly crafted and revealing studies of people and places, whether exploring behind the scenes of the Miss World competition, interviewing Papa Doc in Haiti, or exposing the lifestyles of the hippies of San Francisco, with an enquiring mind and a sceptical tone. This unlikely figure, clad in Gucci tie and blazer, found his way into the nation’s hearts as he went where his audience was unlikely to follow.

The meticulously kept Alan Whicker archive spans the years 1938-2014. It includes a school report from 1938, documents relating to his war career and letters, photographs, extensive production files, audience reports, interview notes and questions (including Whicker’s hand-annotated question cards) and transcripts of every TV programme he made, along with some, as yet, unidentified films. The archive gives an insider’s view of some of the key events, social trends and personalities of the 20th century, while fully documenting the changing world of television reportage across more than five decades.

The material will be stored at the BFI National Archive’s paper store at Berkhamsted where it joins over 600 named collections from individuals such as producers Michael Balcon, David Puttnam and Betty Box, directors including David Lean, Joseph Losey, Michael Powell, Carol Reed, Mike Hodges, Muriel Box and Derek Jarman, writers such as Emeric Pressburger, Janet Green and Trevor Griffiths, and documentary filmmakers such as Humphrey Jennings, Derek Armstrong and Michael Orrom. Among the most recent additions to the collection are the archives of Ken Loach, Alan Parker, Jenny Beavan, Richard Lester, Karel Reisz, Jack Clayton and Halas & Batchelor. The Whicker papers will be able to be consulted by researchers and students of television history once cataloguing is fully completed.

Robin Baker, Head Curator, BFI National Archive said, “This is a major collection that gives us a unique insight into one of the great figures of 20th century television. Alan Whicker was a household name, famed for his daring and insightful investigations of people from all walks of life, from close to home and around the globe. His standards were meticulously high and his programmes set a benchmark for longform television documentary. The Alan Whicker collection is a very generous and important donation from Valerie Kleeman of the Whicker’s World Foundation, for which we are extremely grateful. We’re delighted that Whicker’s papers are now part of the national collection of film and television. “

Valerie Kleeman, Whicker’s partner in life and work for over 40 years and founder of the Whicker’s World Foundation said, “The Whicker’s World archive is now where it belongs – in the safekeeping of the BFI – where, I hope, its content will be of help and guidance to generations to come.

The 90 boxes, carefully curated by archivist Catherine Kirby, contain an intimate and personal take on the last half of the 20th century. Beginning with a letter informing him he has passed his School Certificate and continuing throughout his life in the Army Film and Photographic Unit, journalism and television, Alan Whicker observed both the light and the shadows of life.

Often he witnessed history in the making: war trials in Strasbourg, race riots in Alabama. He had access to the unaccessible: dictators, witch doctors, cults – and even the occasional royal. ‘Whicker’s World’ covered everything from bullfighting and the first gay weddings to the horrors of Papa Doc’s Haiti, always with intelligence, often with humour.

Whicker wrote and filmed what he saw, he had no preconceived ideas, no axe to grind. His motivation was to stimulate, to interest, to entertain…..and to allow viewers to come to their own conclusions.

The archive contains 60 years of carefully documented work: transcripts, notes, diaries and photographs, a lifetime of watching the world through thoughtful, quizzical eyes.”

Alan Whicker CBE (1921-2013) was a renowned journalist, broadcaster and television presenter. During the Second World War he joined the Army Film and Photo Unit, and by the 1950s he was working as a foreign correspondent for a Fleet Street agency, and then as a broadcaster for BBC Radio. In 1957 he was spotted by producer Alasdair Milne (later Director-General of the BBC) who gave him a regular ‘Whicker’s World’ slot on the ground breaking Tonight programme. This paved the way for the longer format Whicker's World which began in 1965 and ran for 40 years on the BBC and ITV.

His reportage spanned the globe and covered a huge range of subjects which reflect all aspects of 20th century culture, politics and history. These include race relations, gay marriage, gun culture, bullfighting, haute couture and interviews with significant (and often controversial) figures of the 20th century, for example, Francois Duvalier (‘Papa Doc’), the notorious Haitian dictator, and oil billionaire John Paul Getty. At the height of his popularity Whicker’s programmes commanded audiences of 15 million people. Whicker's work was also significant in terms of style and format, for example, he was an early pioneer of the 'blue light' programme, a format that is now well-established and perennially popular (shadowing police in their daily and nightly duties). Alan Whicker is a significant cultural figure and a household name for a whole generation. He won many awards during his career including the BAFTA Richard Dimbleby Award and the Screenwriters’ Guild Best Documentary Script (in 1963). His legacy lives on through the Whicker's World Foundation which supports new documentary talent.