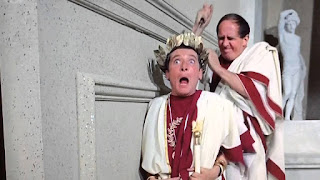 "Infamy, Infamy! They've all got it infamy!" but Alwyn Ash wonders if the Carry On franchise really should carry on regardless...

Having heard news that there is to be a new Carry On movie, I’m certainly very sceptical. Back in the good ol’ days the Carry On team (which mainly consisted of Sid James, Kenneth Williams, Barbara Windsor, Hattie Jacques, and Jim Dale) made us laugh out loud with hilarious and saucy films such as Carry On Sergeant, Carry On Cabby, Carry On Loving, and Carry On Behind. The last original attempt came in the form of Carry On Emmanuelle. The Carry On... franchise performed well, for the most part, between 1958 to 1978, and is regarded as a quintessential take on typical British working class wit and naughtiness. I certainly have my favourites, and developed a teenage crush on actress Carol Hawkins.

The thought of someone resurrecting the franchise for today’s audience is enticing, I can certainly see the positives. But, handled wrongly, I can also see failure. Just thinking back to 1992’s Carry On Columbus pains me – on paper it should have worked, it had some very juicy names attached such as Jim Dale (original Carry On performer), Bernard Cribbins, Rik Mayall, Richard Wilson and June Whitfield; it had original director Gerald Thomas at the helm; employed two writers who were certainly no strangers to the franchise; and copied the formula exactly. It should have worked. The problem, however, lay in both the casting and the timing. The ‘classic’ Carry On movies worked because they assembled a cast that became iconic, household names that formed a relationship through the glue of comedy, and it became theirs to own and share with the audience. 1992’s Carry On... felt wrong because it lacked the original stars and, honestly, the world had moved on: Sid James and his colleagues embraced Britain at the right time, an act that can never be repeated in such fashion again.

If any new Carry On... stands any chance of success then it must not follow the formula laid down by previous instalments, but find its own niche and build on that foundation. Anything else would simply feel like a fan tribute to the franchise. Could political correctness stand in the way of cheap laughs, or would clever writing overcome bridges? Can a new feature still be naughty but nice? If its creators wish to avoid the negative reception handed to Carry On Columbus then they must think outside the box. Attaching names, no matter how funny some think they are, will not make a classic! Sadly, if Johnny Vegas, Russell Brand or Graham Norton are cast, I’m already out. Let’s really go for it and cast young and upcoming actors, or names that rarely get to shine. Let’s create something new, not predictable or tiresome.