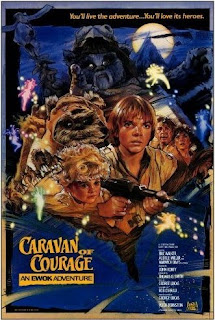 Our small band of Gunters here in The DreamCage universe are reviewing every film mentioned in Ernest Cline's Ready Player One. This week Alwyn Ash takes the Caravan of Courage for An Ewok Adventure...

I am one of the lucky ones, I fell in love with Ewoks from their first appearance in Star Wars VI: Return of the Jedi, and owned most of the action figures - my collection needing only the Ewok village to complete an otherwise fun set. "You'll live the adventure... You'll love its heroes." The tagline for George Lucas’ 1984 spin-off made-for-TV film promised excitement and adventure, and it certainly delivered. I was ten years old, and Star Wars crazy. Honestly, I was likely crazy about a great many things being so full of wonder with that twinkle in my eye, but the space opera in a “galaxy far, far away...” was unlike anything I’d seen before, or since.

The Caravan of Courage took me further into a world I had briefly experienced through the eyes of rebel soldiers as a last stand against the Galactic Empire took hold. Now, in An Ewok Adventure, we got to explore the forest moon of Endor with two children, Mace and Cindel Towani, who are separated from their parents following a crash landing; unbeknown to them, their mom and dad (played by Fionnula Flanagan and Guy Boyd) have been taken by the Gorax, a giant of a beast that keeps them caged in its mountain lair. It is these very kids that are found by Ewoks and taken back to their village. Mace, being the protective older brother, is temporarily regarded as a threat and bound after he tries to overcome the furry warriors. Thankfully trust is gained and medicine is given to his young sister, who quickly develops a friendship with Wicket, the lively Ewok from Return of the Jedi.

After consulting Logray, the wisest Ewok, Mace and Cindel go on the very adventure promised in the film’s title. They are joined by Wicket and other Ewoks who wish to help reunite the Towani family and defeat the monstrous Gorax. What follows reminds me of Dr Who &The Daleks, the feature length movie that had Peter Cushing’s Dr Who join a group of Thals to infiltrate the Dalek city; both even share a deadly lake. Then again, same could be said about Krull. No wonder I geek out on these films!

Caravan of Courage was filmed on a much smaller budget than that available to the original Star Wars trilogy, and it shows. It’s safe to say that the effects haven’t aged well. That aside, it remains a beautiful piece of television history that is just as warm and cuddly as the Ewok animated series that aired the following year. Director John Korty works well with a screenplay by George Lucas and Bob Carrau, and the inserted narrative featuring the voice of Burl Ives gives the film a nice storybook quality perfect for children. Without doubt the true stars of this feature are Eric Walker as Mace, Aubree Miller as Cindel, and Warwick Davis as Wicket. Though Walker and Miller aren’t perfect child actors they do get the job done and manage to deliver touching performances nonetheless.

It is nice to finally explore more of the world’s terrain than just forest, as we get to experience a desert of acid pools and dry lakes, and the treacherous mountainous regions.

Lucas understandably had full control over each step of production, not wishing this to become a second Star wars Holiday Special, which has never been positively received by critics, Star Wars fans, or Lucas himself. Even a TV ad featuring Walker in character to promote the movie was prevented from airing because Lucas disliked it so. There is also the question of the films continuity within the franchise, it has been said that An Ewok Adventure takes place between events depicted in The Empire Strikes Back and Return of the Jedi, but that plausibility doesn’t quite add up – as time progresses, Wicket learns to speak some English thanks to his blossoming friendship with Cindel (as we see in Ewok sequel The Battle For Endor), and yet his encounter with Princess Leia in Jedi clearly projects him as a creature without that ability. It is more than likely that the Ewok movies follow events in the original trilogy, it would also explain why there are so few Ewoks present in Caravan. No? Well, it’s always fun to speculate, and it doesn’t truly matter either way, I’m just glad to experience its light-hearted magic.

What I do find discouraging is the way in which the film has been treated in recent years regarding international release: though a double feature DVD was greenlit to include the sequel, there has been no attempt since at restoring either movie for blu-ray. Whether regarded as canon or not, it would be a shame to overlook the beauty and simplicity of Caravan of Courage – the Star Wars universe is full of wonder, and some of it can be found on the forest moon of Endor.