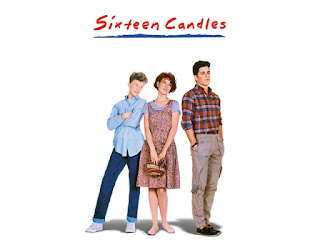 Our small band of Gunters here in the /G-f universe are reviewing every film mentioned in Ernest Cline's Ready Player One. This week Steve Taylor-Bryant takes on Sixteen Candles…


"I can't believe this. They fucking forgot my birthday!"

I'm not sure why but whenever I have conversations with people about the legend that was John Hughes, Sixteen Candles never pops up. Ever! Honestly, I've had hours of conversations about Hughes and his films, the Brat Pack, films like Hughes films and who would be cast in Hughes films today and not once is Sixteen Candles ever brought up and I don't know why. In all my years of writing I've never once put pen to paper on the subject of Sixteen Candles either. So today due to Sixteen Candles inclusion in Ernest Cline's Ready Player One I finally get to write and talk about a film I should have given more love to before today.

"Relax, would you? We have seventy dollars and a pair of girls underpants. We're safe as kittens."

Samantha is about to turn Sweet Sixteen, a milestone for a young lady, but her sisters wedding is the day after, her family have completely forgotten her birthday, her grandparents are an embarrassment, she likes a guy who has a girlfriend, doesn't like the guy who digs her, and there is a Chinese dude named after a ducks dork...

No one likes to be ignored, forgotten, or ridiculed but teenage movies must include these things and it can sometimes be too much but with the deft hand of Hughes at the tiller his films are different and are the reason they hold up thirty some years later. Hughes understands young people, he listens to young people and he casts accordingly. With Sixteen Candles the character of Samantha could have been just a whiny teen not getting her own way but with Hughes script and direction Molly Ringwald shows a depth not normally seen in high school films and manages to create a character that I bought into as a young man and still root for now as I reach the twilight of my years. Yes there is the obligatory school dance, the good looking boy that doesn't know she's alive, and the Geek (Anthony Michael Hall) in the mix playing all sides whilst hiding his own weaknesses, but this coming of age comedy drama is a beautiful take on a subject that anyone but Hughes could have just ruined.

“This information cannot leave this room. Okay? It would devastate my reputation as a dude.” 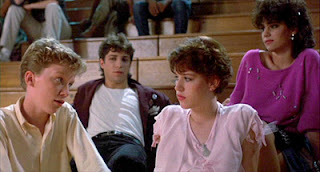 Molly Ringwald was rightly launched into global stardom after Sixteen Candles and whilst everyone mentions Breakfast Club and Pretty in Pink as her best roles I disagree and not only is her performance in Sixteen Candles absolutely delightful without it there might not have been the other films, it really is that defining as a performance. Anthony Michael Hall was born to play the Geek. This role is perfect for him and he is perfect in it, he should have retired after Sixteen Candles because he's never been this good again. Anthony Michael Hall annoys me. How can you play the role of the Geek like a young Oscar contender (it really is that good) and then manage to have a career of obscurity? Yes he played a Griswald, and yes Weird Science is a great flick, and of course there is The Breakfast Club but these films, Candles included, take up just two years of a career! He may have numerous credits on his C.V. but can you name me one project where he was either the main character or as watchable as he was when he was the Geek? I rest my case. Maybe Sixteen Candles is this good because it drew the very best out of its actors? Perhaps I am being unfair on AMH and he is a really good actor still but perhaps Sixteen Candles is the highlight? I don’t know.

“No more yankie my wankie. The Donger need food!”

Add in an ancillary cast of very solid actors including the likes of John Cusak (another that on his day is the best in the business but seems to let me down more often than not) and Michael Schoeffling (never to be seen again) and include just the right amount of humour (grandparents discussing breasts gets me every time) and you have a gem of a film that whilst it isn't maligned anywhere also isn't loved like it should be.

I’m not sure why Sixteen Candles isn’t revered like The Breakfast Club, I am also not sure why it seemed to be the beginning of the end for its cast, but I am sure that once you watch it again you'll remember how bloody good it is and maybe, just maybe, we’ll be able to talk about it again.