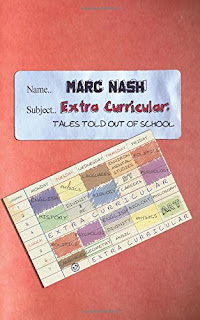 The Defective Inspector does his homework and reads the flash fiction collection Extra-Curricular: Tales Told Out Of School by Marc Nash...

I don’t know how well you folks understand the process of being chosen to review something. A piece of work is raised into the air and we all fling our arms around to grab it and if we are lucky (and have a genuine interest) we are blessed with a product ready to be criticised. Why tell you this? Well I need you all to know I wanted this piece, I wanted to read something which had a bit of an educated backbone rather than it being thrown at me and told to “do my job”. No no we don’t do that sort of this here, I wanted this before I even read the blurb, the concept was too good to pass on. Though I must admit the mayonnaise really starts to tingle after an hour or two…

Generally speaking this piece of literature is a collection of 45 flash fiction stories with a dangerously overeducated undertone. With varying levels of audacity you see the world through the eyes of a particular expert in a particular field. It’s all sub-divided like a class room timetable with completely unique and stories told in a manner which are remarkably detailed while still being strangely approachable. The tone isn’t cold like a textbook it’s relatable and broadly spread across the emotional scale from cataclysmically depressing to whole heartedly hilarious. While the academic standard in some tales reach quasi-professor level it can still be followed by the layman, leaving an after taste of curiosity for the bits which drift over your head. I cannot tell you how much I appreciate google in this day and age, how else would I have worked out the subtext relating to the Schrödinger equation?

It’s rather difficult for me to explain 45 different stories in a relatively small review but I want you to imagine a scenario, any at all. Explaining that scenario depends on the person narrating and the character(s) within the paragraphs. I’d be more logical and scientific while my beloved would be more creative and musical. This means every story you read is a glimpse into the eye of the individuals and to a degree the author as well. I’m not saying every story is the same scenario re-told 45 times, quite the opposite in fact. Ranging from the simplicity of a boxing match to the subverted observation of a government agent the situations are just as diverse as the level of understanding.

Hopefully by now you can appreciate how complicated this can be to read. I for one know absolutely nothing about quantum mechanics, but I do know a chunky amount of biology, so I have to appreciate the literature bite size buffet. If I feel like a particular story is way beyond me and it becoming more a burden than a pleasure to read I can skip it for the moment and sometimes completely side lined entirely. It’s not an insult to the writer to say I didn’t enjoy all 45 stories, collectively I think I skipped 5 stories and 2 of which I returned to. If this book was filled with a 200 page novel with various scientific focuses I would find the concept intolerable and more a task set by a paperback lecturer rather than a world opened by a creative spirit. So I am thankfully we are given the freedom of choice to endure, enjoy or evade.

Writing this review I am tempted to mention a few stories which particularly piqued my interest but I’d dare not say why. Something I truly appreciated about these stories, more precisely my favourite five I am about to mention, develop very quickly and the reading and progressive reveal in such a short period of time is immensely enjoyable. Amusingly I jotted down the page number of my favourite pieces and whimsically imagined putting them into a line and wonder if it would be an international phone number or simply an incomprehensible number. That moment made me realise I had encapsulated the spirit of the book, I was thinking of something simple as a page numbers in the two very different ways. But enough on that! In no particular order I heavily enjoyed for completely independent reasons: Bye Bye Language, Rebirth, Crowd Sauced, In Triplicate and Phonanemic.

I also need to take a brief moment to commend Marc Nash. When reading this book I went into it thinking Mr Nash went all Nick Fury on us and assembled the team of stories to combat poorly funded education system. But… That’s not true… It’s all him. Every story genuinely feels different and every story has embedded cleverness inside it, it wasn’t until I couldn’t FIND the other author name(s) that I was willing to accept Marc did it all by himself. I even contacted the editor of The DreamCage demanding the unnamed authors reveals themselves. No such luck, it was still one man. This isn’t even the 1st book, it’s the 5th one in a series of books just like this! That… that is impressive. Bravo Mr Nash.

That all being said, the book can be exhausting. I tried initially to sit down and take on the literature with the arrogance of an academic only to be rightfully backhanded. It was rather foolish to think “Oh I am smart enough to read anything this book can throw at me” as the diversity of the work forces you to take a break. For example Biology is a broad science so your physiology infused piece will be very different to the biochemical one. This made me read the book in short sudden bursts, reading 2/3 stories and then stopping then letting them ferment in the mind and then returning back. In my case that break could be anything between 10 minutes to 10 hours. The constant change in tone, subject, backstories and writing styles enforces breaks in time where you rub your eyes and wrinkle your forehead thinking back on what you just mentally inhaled.

Despite this, I can’t help but recommend it. This is one of those rare forms of fiction which will educate you without being all preachy about it. In the oddest comparisons this book reminds me watching Frasier, while I may not always understand the differences between each reference I get the gist and overtime I will learn more and more by simply watching it more and more. So congratulations Marc Nash; you’ve bottled a renaissance, put it into an ink well and with an academic quill have masterfully produced 45 beautiful pieces of flash fiction.