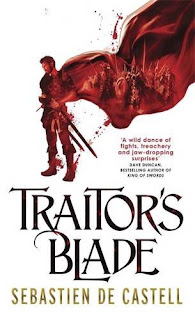 Romeo Kennedy finally gets round to a book series his friends have been raving about and reads Traitor’s Blade (The Greatcoats: Book One) by Sebastien De Castell...

I had heard many good things about The Greatcoats and have been asked many times if I had read it. You see sometimes I can be a little odd with these sort of things. When lots of friends, family, bloggers etc tell me that something is “OMG AMAZING!” and I can see a real buzz online and elsewhere about it, I tend to shy away from it, not because I think what they are saying isn’t the truth, In fact as I write this I’m not even sure why I do it. I just know that sometimes it may take me a while to begin a series when friends etc have finished the set.

The Greatcoat series by Sebastien De Castell is just one example of this, as the third book was released a couple of months ago, I believe, and I was reading the first book a fortnight ago.  But as much as I would like to have read it a while ago, I’m very grateful to have read all three books released so far.

Here is the synopsis for Traitor’s Blade

The King is dead, the Greatcoats have been disbanded and Falcio Val Mond and fellow magistrates Kest and Brasti have been reduced to working as bodyguards for a nobleman who refuses to pay them.

Things could be worse - their employer could be lying dead on the floor while the three of them are forced to watch as the killer plants evidence framing them for the murder. Oh, wait, that’s exactly what’s happening ...

A royal conspiracy is about to unfold in the most corrupt city in the world and it could mean the ruin of everything Falcio, Kest and Brasti have fought for. If the trio want to unwind the conspiracy, save the innocents and reunite the Greatcoats, they’ll have to do it with nothing but the tattered coats on their backs and the swords in their hands, because these days every noble is a tyrant, every knight is a thug and the only thing you can really trust is a traitor’s blade.

The story unfolds through the eyes of Falcio Val Mond, the First Cantor of the Greatcoats. Each chapter is nicely paced and with a little backstory of Falcio’s life and how he came to be a magistrate. These chapters are spaced in a way that does not take you out of the action and the progressing story. De Castell makes the backstory relate to the goings on and does so in a way that is almost conversational and this really opens the world of Tristia for the reader.

Falcio is a man who adored King Paelis and genuinely wants to make Tristia a better and just world. Always at his own peril. The reader cannot help at times feeling sorry for the dear man whose scars are not just on the outside.

His friends Kest Murrowson & Brasti Goodbow will follow him to the ends of the earth and will do over and over again. Kest is a childhood friend of Falcio’s and can be described as the Neil Peart of swords, and Brasti not only provides the comic relief and annoyance to Kest and Falcio, but is someone who you would want at your side in a battle.

From the beginning I cared about these characters and with each turn of the page was genuinely worried what was going to happen to them. De Castell writes fight scenes that are technical but flow ever so flawlessly, and they are quite possibly some of the best fight scenes I have read. With twists and turns and goodness knows what around each corner, the story reaches a stunning finale that will leave you wanting more. It is humorous, and even an ol’grump like me chuckled a few times, but with that humour comes a lovely dark tone, that fits the mood and energy of the book.

There is much more I could say about Traitor’s Blade, and what happens but I won't spoil it. So by Saint Caveil-whose-blade-cuts-water go and grab yourself a copy, speak the oath and join the Greatcoats.

Traitor’s Blade is out now via Jo Fletcher Books www.jofletcherbooks.com