Film - EIFF: A Patch of Fog 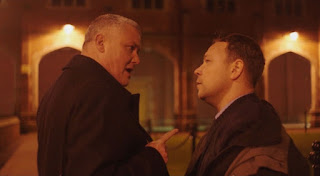 The title of the film refers to the title of the book written by an author turned arts critic Sandy Duffy (played by Conleth Hill of Game of Thrones fame), the book a one hit wonder that his agent is still touting after 25 years. However, Duffy, probably to relieve the boredom and to attain that “high” of achievement again, has developed a bit of a habit for shoplifting but gets caught on CCTV by a shop’s security guard, Robert (the wonderful Stephen Graham from Boardwalk Empire), a fan of Duffy’s work who uses this “secret” to blackmail Duffy into being his friend.

I haven’t watched such a superb character driven film in a long time. This depth of character study is possible thanks to the acting talents of Hill and Graham as well as the stunning writing and direction, which combined to create characters who were incredibly dislikeable in their own ways but whom you couldn’t help but watch although you were rooting for neither. The dynamic between Robert and Duffy is tense and intense and the beauty of the film is in watching the balance of powerplay switch between one and the other several times as the story twists and the situation escalates for both of them.

This works so well because neither man is completely innocent, neither is the absolute victim, meaning that blackmail and bribery are easy. The real chill comes though when you realise that both men know exactly what they are doing, there is desperation but no madness in their reasoning, and there is a deliberateness to the manipulation on both sides that is both sickening and fascinating to watch as neither one is willing to give up on their own growing obsessions. From the outset, it is obvious that Robert is obsessive about having Duffy as a friend and would never give up on that but there were several points where Duffy could have walked away from the whole situation if he was willing to live with the guilt and consequences of both what Robert could do to Duffy’s own reputation and what Robert might do to himself.

The intensity of the film was added to by the striking cinematography, making use of the colours, low lighting and rain in the Belfast night to add to the already oppressive feeling. One scene in particular floods both characters with a wash of red light that is stunning to watch. The set design too, the faded opulence of Duffy’s house and the sordid look of Robert’s, complete with a vivarium of snakes, only served to reinforce their broken personalities.

At the end of this 90 minute film I realised I was sitting with my hands clenched so tightly that my nails had made marks on my skin. But that is nothing to how much those two characters managed to get under my skin. Bravo.

A Patch of Fog gets a theatrical release on 8th July and 11th on VOD.
Email ThisBlogThis!Share to TwitterShare to Facebook