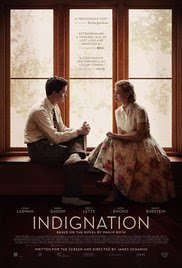 This may be James Schamus’ directorial debut, but he already has a wealth of experience all of which comes through onscreen in ‘Indignation’.

As co-founder and former CEO of Focus Features, James Schamus was responsible for releasing some of the most stylish independent films of the past 15 years. He has cultivated a remarkable career, largely thanks to his collaborations with director Ang Lee and the Coen Brothers, amongst others.

With ‘Indignation’, Schamus has adapted Philip Roth’s complex novel about a clever and spirited youth finding his way in the conservative, straight-laced America of the 1950s.

Logan Lerman (‘The Perks of Being a Wallflower’ ‘Percy Jackson’) plays Marcus Messner, an idealistic young man who escapes his controlling parents and the Korean War draft by gaining admittance to Winesburg College in Ohio, with the intention of becoming a lawyer. Although raised in a strictly Jewish household (he grew up helping his father in a New Jersey kosher-butcher shop), Marcus ardently identifies as an atheist.

Logan Lerman’s portrayal of Marcus steers away from the nervy, high-strung Jewish stereotypes popularized by Jesse Eisenberg and Woody Allen. Although introverted and self-contained, Marcus is no pushover and can stand up for himself, as he does in the film’s stand-out scene — a long interview between Marcus and Dean Caudwell (playwright and actor Tracy Letts) that spans 30 pages in Roth’s novel and a makes a spellbinding 15 minutes of onscreen verbal duelling.

This tour-de-force encounter encompasses a fiery sequence in which the university’s primary authority figure tests the precocious young freshman’s mettle. Despite an onset of queasiness, Marcus boldly defies the Dean and vehemently makes an articulate argument for his own values.

Dean Caudwell may not see eye-to-eye with his student, but to his credit, he perceives an incisive intellect and cannot help but have admiration for Marcus’s tenacity. Asked by the Dean how he gets by without a god to worship, Marcus replies simply: “I get straight ‘A’s.” It’s a riveting, marvellously written scene, displaying the uneasy meeting of two competing, but highly intelligent and literate minds - which ends rather surprisingly.

As a cosseted only child, Marcus doesn’t adjust well to sharing his space with his Jewish room-mates, the unresponsive Ron (Philip Ettinger) and a closeted drama major Bertram (Ben Rosenfield). Also, as an avowed atheist, he resents being forced to attend chapel ten times a year, a situation he is encouraged to ‘sidestep’ by his Jewish peers.

He does however, ask to borrow room-mate Ron’s Cadillac LaSalle car so that he can ask the lovely and enigmatic Olivia Hutton (Sarah Gadon) out on a date. Things go far better than he expected, and Marcus is taken aback by Olivia’s candidness, sexual assertiveness and experience.

Confused by Olivia’s unorthodox behaviour, he makes the mistake of confessing the incident to his room-mate, the ever unimpressed Ron. Infatuated with the beautiful, baffling Olivia, Marcus wavers, but then seeks to continue the relationship. However, news of Olivia’s brazenness spreads throughout the college and feeling somewhat guilty Marcus does not take kindly to hearing his male peers call her a “slut”.

While visiting her son in the college infirmary, Marcus’ long-suffering and protective mother Esther (a marvellous Linda Emond) notices the scar on Olivia’s wrist from a failed suicide attempt and although sympathetic to the girl herself, insists that her son ceases contact with his unstable girlfriend and finds a less difficult and destructive partner. Unfortunately, as beautiful and tragic as Olivia is (the character is apparently based on of Sylvia Plath) we can understand the mother’s concern. Olivia herself describes her permanent condition as one of constantly struggling for emotional control.

‘Indignation’ is concerned with the rigidity of mores and of institutions—academic, religious, philosophical, parental—which fail in their compassion for the needs or beliefs of others. They misunderstand, confine and restrict youthful energy and idealism but also provide something for the young to push and rebel against in their search for their own identity.

Schamus’s script is intricate and intellectual but its challenges are met ably by the young actors Logan Lerman and Sarah Gadon. Lerman also receives his first executive producer credit on this film.

‘Indignation’ was Philip Roth’s 29th novel - an emotional and highly personal piece which fictionalized Roth’s own early ’50s college experiences. James Schamus has crafted an extraordinary and polished adaptation of Roth’s thoughtful and timeless tale of lost love and innocence. The Sundance audience broke into spontaneous applause at the end of this movie. I loved it. It deserves to be seen.