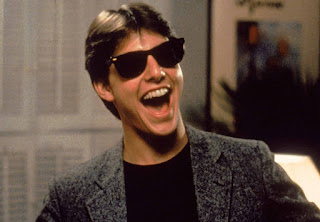 Our small band of Gunters here in The DreamCage universe are reviewing every film mentioned in Ernest Cline's Ready Player One. This week Steve Taylor-Bryant takes on Risky Business…

I don't believe this! I've got a trig midterm tomorrow, and I'm being chased by Guido the killer pimp.

I'm a huge fan of Tom Cruise and whilst my discovery of him as an actor was the brilliant adaption of S. E. Hinton's The Outsiders, many of you learnt about Mr. Cruise via teenage comedy Risky Business. I call it a teenage comedy but to be fair it was slightly more than just that tag and very clever in its delivery, but we'll get to that.

Suburbia and the happy middle to upper class family goes on holiday and leaves child at home story is a well trodden path in films, especially in the 1980's where just about every film was some kind of child/teenager does something they shouldn't adventure. 1983 Risky Business was released, prime time teenage film era, prime time comedy era, but whilst many movies were duplicates of each other and indistinguishable from the last/next release, a few were just brilliant. John Hughes sort of won the 1980's for his teenage stories, Ferris Bueller was epicly funny, but Risky Business did something slightly different and looked back at history before delivering its life lesson. It was more The Graduate than it was sitcom on the big screen. Yes, it had the obvious laughs and insecurities that a sitcom plays on but it had a real soul in its story and an almost old fashioned performance from its cast and a lot of what you learned and needed to get the depth of the story was cleverly written by its director Paul Brickman. Brickman gives the undeniably great lesson that less is more. It's not a heavy dialogue script but it's not a lightweight film by any stretch of the imagination and Brickman's direction, quality screenplay, and near perfect casting means Risky Business stands the test of time, it ages with us as viewers without ever looking old.

Cruise as Joel Goodsen is magnificent. His perfect smile and youthful exuberance, which he has somehow still got 33 years later, is matched by his channelling of Dustin Hoffman. This is no mean feat and I don't throw that compliment out there lightly, but Cruise was as watchable and talented as Hoffman was as Ben Braddock all those years before and played off the wonderful Rebbeca De Mornay as Lana with an ease and professionalism that belied his relative inexperience. De Mornay was epic, as she is in most things, and her enactment of Lana took what could have a very cliched character and gave the audience something different. The heart of gold despite being a lady of the night has never played well with me, mainly because the portrayals are nearly all 'but she's still a hooker' but De Mornay rose above the usual and almost becomes a mother figure for the young men watching the film.

Getting comedy right must be a thankless task as no ones sense of humour is the same, telling a life lesson at the same time? I wouldn't even know where to start! But Brickman and his team, don't forget this was only Cruise's 4th film and De Mornay's 3rd, showed the world there is value in inexperience to produce a film that stands the test of time.