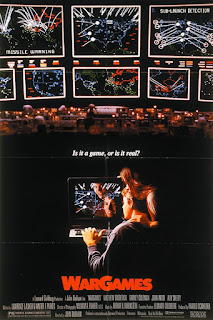 Our small band of Gunters here in the /G-f universe are reviewing every film mentioned in Ernest Cline's Ready Player One. This week Nate McKenzie presses the button on War Games...

WarGames is a film that is near the top of most "Best of the 80s" movie lists.

You know the story. High School computer whizz David Lightman accidentally hacks into NORAD using a backdoor on a computer program. While trying to play what he thinks is a computer game he unwittingly initiates a simulation of Global Thermonuclear War. The computer doesn't know the difference and subsequently leads to both the U.S. military and the Russian military preparing for an actual war. David is brought in by the FBI and accused of being a terrorist. Using his wits and ingenuity, David manages to escape custody and, along with his crush Jennifer, track down the creator of the computer program to ask for his help in defeating the game, in order to stave off war.

WarGames features quite a bit of overacting and the idea of a high school kid escaping custody of the U.S. military from a highly fortified installation is pretty far beyond believable.

So why is this movie so beloved?

For one: Matthew Broderick. For two: Ally Sheedy.

Those two staples of 80s film canon wrapped up in a plot that involved a lot of tech that was burgeoning with mainstream interest amidst the personal home computer industry boom that took place in that decade combined to elevate WarGames to cult classic status.

Russia as a threat to American safety was an oft used trope for many years, and especially so in the 80s, because Russia was a real life threat.As far as films about impending war go, WarGames is a watered down example; but that doesn't negate the fact that it was relevant and possesses strong elements.

As kids of the 80s were getting their hands on more and more video games while at the same time discovering the challenge of home computing, WarGames came along and combined the two. Seasoned with the threat of war that those same kids were well aware existed and the filmmakers had a hit that was consumed by the generation that led the march into the digital age in which we currently find ourselves.

The idea that a high school kid could instigate and then squelch a potential global nuclear war is a scenario that any kid with an imagination can envision themselves headlining. For any kid with dreams of being rescued from a mundane existence, sent on an adventure, and thrust into the role of hero, there are numerous films that offer that fantasy and many of them are a part of 80s cult canon: The Goonies, The Last Starfighter, and The Neverending Story to name three.

But as far as tangible and topical films in that vain go, WarGames enthralled an entire generation of video game nerds and computer geeks. David Lightman's fortunes cast the vision in their head that their obessions might someday be the difference between their inevitable heroic fate and the demise of the world.

That vision is the reason WarGames captured the heart and allegiance of so many people.