Audio - Doctor Who: The Book of Kells 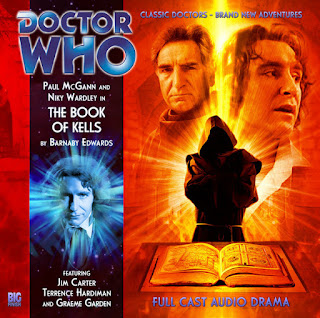 Our Doctor Who audio expert, Tony Cross, delves into the back catalogue available from the Big Finish website. Today is the Eighth Doctor and Tamsin adventure The Book of Kells…

The Book of Kells is rather good fun but not particularly 'deep' - if that's the right word. Indeed it is, for obvious reasons, not dissimilar to The Time Meddler in tone, plot and pretty much everything else. Although with bonus feisty female companion and a wee little twist at the end, which I quite like.

The Doctor and Tamsin pop up in 11th century Ireland caught hook, line and sinker by some kind of vortex fisherman. Being the Doctor he doesn't just turn up anywhere in 11th century Ireland. He turns up at the Abbey of Kells just as the Book of Kells is about to be completed and King Sitric . And someone is trying to steal the book. Is it Brother Bernard? Is it Lucius? Is it Olaf the Viking? Is it...well...it'll turn out to be slightly more complicated than just nicking a book.

It's got a fantastic cast. Brother Bernard is played by the regularly magnificent Jim Carter, The King Sitric by Terrance Hardiman, Olaf Eriksson by Nick Brimble and Ryan Sampson as Brother Patrick. They've all got great voices and they all put in lovely performances.

Ash Hindmaster also does a stonking job of Brother Lucianus, the Abbot's side-kick. There's a certain cheekiness to Lucianus, which I quite like.

Then there's Abbot Thelonius aka Thelonius Monk aka The Meddling Monk played with dry wit and a certain style by Graeme Garden. I always liked the Meddling Monk. It was nice to have a dodgy Time Lord who didn't have the entire destruction or domination of the Universe planned. The Meddling Monk was just up to a little temporal trickery: a theft here, a twiddling of the time lines there. Nothing too serious, nothing too nasty. Even if he did find himself forcibly teamed up with the Daleks back in Daleks' Master Plan and comprehensively out-manoeuvred by The Doctor.

Garden puts in a great performance as well and some of the hints from the previous stories seem tied to The Meddling Monk too. I assume he was the traveller who put the advert in the paper that the Doctor answered in Situation Vacant and was the Time Lord that kick-started the events in Nevermore. Perhaps not. I think, if the ending of this story is anything to go by we haven't seen the last of the Meddling Monk on Big Finish.

This is also a nice McGann story too as it's all rather light and fluffy so he gets to have some fun as opposed to being required to be all soulful and dark. How long this is going to last for I don't know. It helps that companion Tamsin (Niky Wardley) seems to constantly be stumbling into things, misunderstanding stuff and generally being a bit of a ditz. Wardley's good but Tamsin is midly annoying at points, although gets less so as the story goes on. Perhaps she's meant to be like this to illustrate the kind of fools normal people would make of themselves if being dragged through time and space. We all like to think we'd be heroes. Truth is perhaps we'd just be confused, scared, lost and inclined to make silly mistakes.