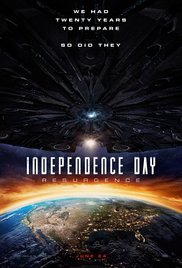 The poster says "We had twenty years to prepare. So did they." So was it worth the wait? Nate McKenzie watched Independence Day: Resurgence...

If you are yearning for a Science Fiction film that bends your perception of reality, both challenges and inspires you as a human, and fills a previously undiscovered void that exists inside your curious mind... Independence Day: Resurgence is not the film for you.

Twenty years after a hoard of exo-skeleton clad beings from the far reaches of the Universe stomped mankind into near extinction, humanity has regrouped and is flourishing. The marrying of alien and human technology lept scientific and technical progress generations forward. The world is united as one in the aftermath of the attacks of July 4th, 1996. War is obsolete... save for the impending threat of Their return from deep space.

The original Independence Day is a classic End of the World SciFi film. That film, and the entire genre, is one of my favourites. However, upon a recent re-watch of ID4 I realised just how bad the CGI is. Though the movie still holds up against the test of time - it's exciting, funny in doses, and features quality acting - it doesn't look great. Watching it, I was reminded of the time I ran into a crush from high school who was still as funny and sweet as ever, but hadn't aged well. [1]

Resurgence is much prettier to look at than its forebearer and has exciting moments. Neither of those things make up for how vapid the movie is.

Interspersed with impressive shots of giant alien spacecraft and high-tech aerial dogfighting are unending spans of Junior High acting and jokes that smother scenes like a wet blanket. The numerous shortcomings and the pleasing aesthetic seemingly bookend pages of a script that was written by throwing darts at a storyboard filled with references to the original film.

There were moments of real hope that the film was elevating to a plateau of quality Scifi but time and again the ascent lost momentum and ended up a burning heap of storyline wreckage. [2] 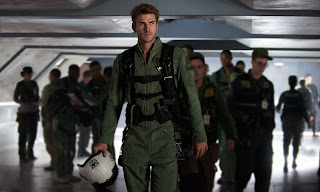 The cast is as ill-fitting and awkward as a group of blind dates staying in a remote cabin for a weekend. By the time I left the theater I had forgotten that I just watched Liam Hemsworth on screen for two hours. Maika Monroe is a great example that not everyone can go from horror to big budget the way Jamie Lee Curtis did. It is also complete bullshit that Mae Whitman was not cast to reprise her role as President Whitmore's daughter. Whitman is a better actor than Monroe, and if I can insert my personal opinion, far more attractive. To hell with Hollywood's perception of "conventional, star-quality" beauty.

Jeff Goldblum was... well, he was Jeff Goldblum, but this time with a new contrived love story squished into the narrative. [3]

Jessie T. Usher was cast as a mere placeholder because Will Smith wasn't in the movie [4]. Usher could have been utilised far better, but clearly there wasn't enough time/room to fit in another storyline what with all of the CGI and the white people that demanded attention. The future is surprisingly Caucasian. There are three black people in this movie; one is a stereotypical African role and another, they kill off. Because of course they do. [5]

The only sentimental aspect of the film was the revelation that Brent Spiner's character, Dr. Brakish Okun, is homosexual. The way it was subtly revealed, without blatantly shoe-horning it into the movie, kind of annoyed me. Because it was done so well! Which of course leads me to believe that if the film-makers had taken the same care with the rest of the story they could have made this an all-time classic in the SciFi genre.

Instead, all the pieces simply didn't fit together and the result is a finished puzzle that, despite being in high definition, has no clear picture.

[1] No doubt she felt the same way. I am no George Clooney.
[2] Apparently things didn't work out with Constance, the ex-wife he pines for in the first film.
[3] Specifically, the entire side-story involving Julius Levinson (Judd Hirsch) was more of a disaster than New York City after the first attacks in 1996.
[4] I don't care how much money he was asking, you pay him. There are four Independence Day icons: hotdogs, cold beer, fireworks, and Will Smith.
[5] They didn't even bother to pay homage to the characters death. It was just like, "Oops. They're dead. Sad. Hey look more white people!"