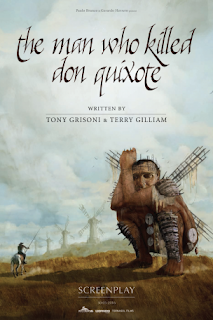 Exciting developments for the Terry Gilliam film as more cast is revealed for The Man Who Killed Don Quixote...

It's been revealed on the website of one of the companies financing the film that Willem Dafoe and Stellan Skarsgard are now listed as key cast members in Terry Gilliam's The Man Who Killed Don Quixote. They join Gilliam's Python pal Michael Palin, who will play Don Quixote himself, Adam Driver (Kylo Ren from Star Wars) as the Pancho Villa-alike Toby and with Olga Kurylenko signed on too the cast is filling out nicely.

The synopsis, taken from the film production website Alfama says:

"Toby is an arrogant and blasé advertising director. While in Spain, he went to the village where he had turned his early film, a lyrical adaptation of Don Quixote. The film has disrupted the lives of the inhabitants, and the old shoemaker who played Quixote never came out of his role. A series of incidents forced Toby to follow the old fool who takes him for Sancho Panza. This is the beginning of incredible adventures, where reality and fantasy mingle."

Truth is we don't really know the story yet because there is much rewriting in progress but we are wishing hard.

However, with locations being scouted for shooting rumoured to start by the end of the year using a screenplay co-written by director Gilliam with the scribe behind the film Fear and Loathing in Las Vegas, Tideland and The Young Pope, Tony Grisoni, it promises to do more than tilt at windmills... eventually.