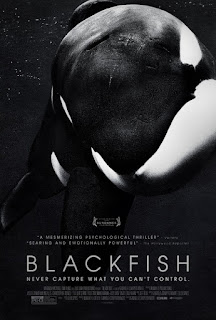 As part of our Non-fiction Weekend, Romeo Kennedy watches the powerful documentary about orcas in captivity, Blackfish ...

Some documentaries set the bar for a view into the deepest, darkest corners of our world and of our lives.

Blackfish goes beyond that.

This documentary is harrowing, anger inducing and, on my third watch of it, I could not hold back the tears, and even whilst writing I struggle not to cry, this was an incredibly difficult article to write.

But most of all, this documentary is important!

For years animal activists have campaigned tirelessly for the repatriation of orcas and other cetaceans into open sea-pens and not make them suffer as mere attractions for human entertainment. Since the release of Blackfish in 2013 there has been momentous legislative changes into how the marine park, Seaworld, in particular operate. There is still a lot further to go. But we as the human race, must stand up for the animals who have no voice and collectively say, These barbarous, inhumane actions have no place in the world today.

The film directed by Gabriela Cowperthwaite, features testimony from Seaworld trainers past and present many of whom are very much active voices within the campaigning to set these wonderful mammals free.

Voices like John Hargrove (who has written a fantastic book on the same subject entitled Beneath The Surface), Jeffrey Venture and many others who have since left the employment of Seaworld.

The film starts with a 911 call stating that a whale has killed a trainer.

At this point I will say "viewer beware" because there are some very in-depth descriptions of deaths and accidents that occurred at the parks mentioned in the film.

The aforementioned trainers, representatives of OSHA (Occupational Safety and Health Organization, part of the United States Department for Labour) and a range of experts, introduce the film and talk a little about the legacy of Seaworld, and then the trainers interviewed talk about how they became involved with Seaworld and what it meant to them working with the orcas and other sea mammals.

One thing that really struck me within this segment was that, "You don't need to be a marine biologist" (sic) to be a Seaworld trainer, you just have to be physically fit and, of course, a very good swimmer.

What follows is the held on-screen image of the late Dawn Brancheau, who the film focuses on in great length. The juxtaposition of statements from trainers to the haunting image of the beloved Dawn Brancheau gives the viewer the sense of all is not as it seems in this park of "dreams." 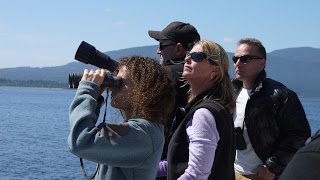 The film then shows the establishing of sea-parks in North America with footage from 1976 that shows a family of orcas being herded by boats for eventual capture in Puget Cove Washington State. A practice that is now illegal.

The whale calves were ripped from their family's care and taken away.

A retelling of memories from the men who were responsible for the despicable action is very upsetting to watch. One man tells of how the orca pod would follow the boats trying desperately to retrieve their infant. Another gives a tearful statement to how they only needed to capture the babies and to stop the pod from following they would drown the adults.

At this point in the film I broke my heart.

Following on with this is archive footage from 1983 which shows the capture of Tillikum from the North Atlantic who was then taken to Sealand in Canada (a park that is no longer operating.)

But the statements from former Sealand employees recount the appalling conditions that the whales were kept in, and the damage the orcas were carrying out on each other, an act described as "raking,’ which is when the orca will rake its teeth on the flesh of another whale in an attack.

Visitors to the park described Sealand as a "Swimming pool."

Tragedy struck at Sealand with the death of Keltie Byrne, a 21 year old marine biologist student and a competitive swimmer. Keltie Byrne tripped and fell into the pool containing Tillikum and other whales and Tillikum dragged her under.

We hear the testimony of two women who were at the park that day and witnessed the death of Keltie Byrne. At the time, the death was a small footnote in the newspaper and the viewer will see that the death was reported as a simple case of drowning.

Sealand then sold Tillikum to Seaworld in 1992 on the proviso that Tillikum would not be a performing orca. We later learn that Tillikum was one of Seaworld’s biggest performers.

Tillikum is one of many whales mentioned throughout Blackfish but his reputation as one of Seaworld's key breeders and biggest assets is clear. What is also relayed is that Tillikum is a very beloved whale by the former trainers and it is important to note that upon this very large whale's arrival no trainer was informed of the death that the orca was responsible for at Sealand.

Many of the park's soundbites and lines are proven by the representatives of OSHA, trainers and other experts to be far from the truth e.g. an orca's lifespan is "35yrs in the wild.” Whereas we learn it is actually up to 100 years in the wild, and dorsal collapse does not happen in the wild. Seaworld, however, say otherwise. 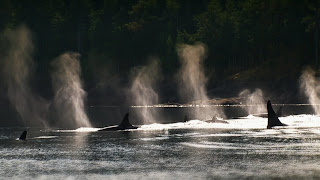 Blackfish shows clearly that no matter how many times Seaworld declare that the cetaceans in their park are a "family" this is not so. One interviewee states that they are an "Artificial semblance of their collection."

This of course leads to hyper aggression between whales.

An example of this is the horrific death of Kandu the orca in 1989 who bled to death after being attacked by other whales.

The documentary shows many examples of the disgusting treatment of the these beautiful animals like the separation of calves from their mothers who then use long range frequency echolocation vocalisations to try and contact their babies. One trainer states that he witnessed a mother screaming and shaking in the corner of the enclosure watching helplessly as her baby is taken from her.

Throughout the documentary the viewer will see the many untruths and the hushing up of accidents, deaths within the park, for example trainer Ken Peters who was dragged under by an orca and held, then emerging for a few minutes before being taken under again and held. If it wasn't for his extensive diving experience and trying not to in anyway exacerbate an already dire situation Ken Peters may have not survived.

The film also shows (through obtained court documents) that representative and head trainer Kelly Clark of Seaworld lied in court about the affiliation between Seaworld and Loro Parque in Tenerife, where a trainer, Alexis Martinez, was killed by an orca. Martinez (and other trainers at Loro Parque) were trained by Seaworld trainers and the park was supplied with orcas from Seaworld.

In 2010 trainer Dawn Brancheau was killed by Tillikum.

The film shows that Seaworld chose to tarnish Dawn's reputation as an experienced trainer by changing their story multiple times in order to assuage guilt from their top financial asset, Tillikum (as the film mentions, fifty plus whales carry Tillikum's genes.)

Throughout the testimony of the former trainers and other parties and archival footage, Seaworld go to great lengths to depict these wild animals as cuddly and will spin any situation in order to keep operating and to retain these magnificent creatures in enclosures that may as well be goldfish bowls.

Even though the film in its entirety will always stay with me, one image that I shall never be able to forget is that of Tillikum floating within his tiny pool, in a lifeless manner. Miserable to the point of helpless depression. 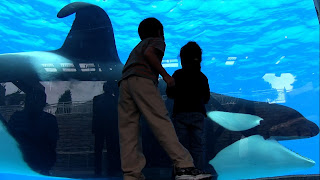 In my opinion Tillikum is the saddening result of the devastation that captivity causes to these magnificent mammals.

They do not deserve, want, or need to be used as living props in a cruel circus dominated by greed and lies.

I hope that one day humanity can look back on places like Seaworld and see it with not only the disdain it deserves but for the abhorrent horror show it really is.

It is worth noting that there has not been a single case of an orca killing a human outside of captivity. You wouldn't put piranhas in your bathtub so why on earth would you put an orca in a swimming pool?

Since Blackfish was released many milestones in legislation have been reached by the courts.

Seaworld trainers are no longer allowed to be in the water with the orcas during shows.

Seaworld are no longer allowed to breed from their whales in all their parks, (Florida, Texas, San Diego)

But the documentary also marked the beginning of the end for Seaworld.

Their visitor numbers are down and their profits have plummeted. Many musicians/bands have refused to play at the park and companies refuse to endorse them.

Sadly, Tillikum has recently become ill with a drug resistant bacterial lung infection. Seaworld's information on Tillikum's health is sketchy at best, as it would appear they have not been forthcoming with his condition.

It does however, sadly appear that Tillikum will die at the park. I truly hope that many of the other orcas will be released into sea-pens and live out their lives with happiness. I really do.

I highly recommend this documentary and I truly feel everyone should watch it. Even though I have summarised a lot of the film's content, it really needs to be seen. Then take note that under the water, all is far from black and white.