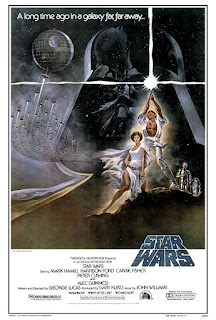 A long time ago, in a galaxy far, FAR away... our small band of Gunters in The DreamCage universe are reviewing every film mentioned in Ernest Cline's Ready Player One. This week David Ames starts the original Star Wars saga with Episode IV: A New Hope...

With a story as epic in scope as Ready Player One, many comparisons will and have been drawn between it and other famous works. RPO fits perfectly into aspects of Joseph Campbell’s classic Monomyth—otherwise known as the hero’s journey. With this being said, it is no wonder that works of similar scope also occupy that territory. One such work is the classic story of a boy from a home torn by tragedy. He travels to great lengths to discover who he really is and in the end, not only discovers his true self but where he belongs, his family and friends, and what makes life worth living.

No, this isn’t about Great Expectations or David Copperfield…

Imagine if you will, a younger, much skinnier version of myself, sitting before that classic wooden tube television that all of our grandparents owned. Before me, when I was probably no older than seven or eight, unfolded what would become a lifelong passion of mine. My grandmother, needing some way to occupy her very curious, very hyper, yet very allergic (to fucking everything) and very sickly grandson, inserted a VHS copy of Star Wars: Episode IV: A New Hope. From that moment on, every time I was at her house, I would watch that trilogy (they all came out before I was born).

I remember as a child that what I loved the most was the action, the lightsabers, the X-Wings, THE FORCE (the mystical ability to basically do anything depending on the film/novel/comic you are looking at)…you know…the cool shit. But as I got older, I fell in love as well with the story, the characters, and the creatures. In essence, the world(s) that George Lucas created were something that I wanted (and still want) to be a part of so much that it hurts.

Before Star Wars, George Lucas was relatively unknown, only having really written and directed a sci-fi film named THX 1138 and the culture wonder that became American Graffiti. He originally wanted to adapt the Flash Gordon characters for his own serials but couldn’t get the rights and therefore insisted he would make his own. What followed was an amalgam of Flash Gordon, Edgar Rice Burroughs’ John Carter of Mars Series, and the works of Jules Verne and then combined his own world building to create something that, while not wholly original, was amazing in its own right and approached the material with a seriousness not yet seen on the big screen. Lucas wrote, produced, and directed the first of the series, produced and wrote the subsequent sequels, and then picked up the reins again over a decade later and wrote, produced, and directed the prequels.

I plan to review all six of the films but to do so, I think I need to start at the beginning: Number IV.

Star Wars: Episode IV: A New Hope, released originally just as Star Wars, begins in that now famous quote: A long time ago in a galaxy far, far away…followed by the crawl of background text. The galaxy is at war and the evil Galactic Empire is chasing down Princess Leia who has stolen the plans of the Empire’s newest and most fierce weapon: a space station known as the Death Star that can destroy a planet. Then the wonder begins with space ships on the outer rim of some planetary system firing at one another. Lucas did something brilliant in that he never hid his villain for a lengthy, dramatic reveal. Nope…Darth Vader shows up in the first five minutes to fuck up all those who stand in his path. Also, as is known now among the Star Wars world, this is the only moment when the Stormtroopers actually hit anything until Star Wars: Episode VII: The Force Awakens.

Droids named C-3PO and R2-D2 escape from the ship and land on a desert planet named Tatooine. R2-D2 carries the plans which lead our eventual main character, Luke Skywalker, across the galaxy to battle the forces of evil. I’m trying not to just detail the whole plot here because if you haven’t seen Star Wars…what the serious fuck? 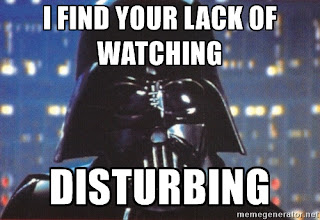 Along this journey, we meet an ageing, creepy hermit named Ben Kenobi (played wonderfully by Alec Guinness who later broke my heart by saying he hated the role), later revealed to be Jedi master Obi-Wan Kenobi. Jedi was an old religion which focused on logic and reason and could use the force. He details that he knew Luke’s father and that Darth Vader killed him. Once the Empire destroys all of Luke’s familial ties (dick move, right?), he sets out on what will become his Monomyth. From here, we meet the rest of the famous cast of characters.

In a seedy bar, a wretched hive of scum and villainy if you will, we get to meet Han Solo. He is the cowboy of this picture, the smuggler, pilot, and criminal played by Harrison Ford (who also starred in American Graffiti) with so much swagger that it is amazing all of the female cast don’t just drop their pants when he walks by. Also, by his side is the Wookie Chewbacca who is scary and cuddly all at once.

Let me say this and settle the argument once and for all. HAN SHOT FIRST.

Once they board the Millennium Falcon, Solo’s ship and one of the most recognizable pop culture vehicles of all time, they are off to rescue the princess and save the galaxy. From here, we get to meet Princess Leia played by Carrie Fisher. Then as the story continues, we have death, planetary destruction, hilarious acting, and overall amazing special effects for the 70’s. I don’t think I need to go into depth about what happens because once again, go watch it for the first time—or the hundredth…whatever. Just watch it again.

One thing that must be mentioned before rounding out this article is the amazing score by the titan John Williams. He crafted such important and recognizable music that today, the mere music is used to reference the film. His score is beautiful and haunting and epic and basically everything that a Sci-Fi Space opera needs. Without Williams’ music, the film wouldn’t be half as awesome as it is.

While the story is well-known, something that isn’t is what this film means to basically anyone who likes it. This film represents the start of a multi-billion dollar empire—the small form of escape that so many have taken part in when we didn’t belong other places. This movie is what begins something so dear to fan’s hearts that they break down even at the mention of certain parts of the series.

For my own part, Star Wars is something so close to my heart because not only did it help me to escape bullies, my parents’ divorce, and my constant sickness, but it was also one of the few things my grandfather and I were able to enjoy together. I love this series so much that, when I saw Episode VII this past year, I cried just at the crawl. And not just one glistening tear either. The flood gates opened because that little boy inside me crawled his way back out.

There are so many things in A New Hope that I can point to which could use updates or are hokey and ridiculous but why would I want to? I love the film not in spite of its flaws but because of them. They make the experience that much better.

If you want to enjoy something amazing, these are the films you are looking for.

George Lucas and the studio were both convinced that it was going to be a flop. Lucas did retain all of the merchandising rights though…nice move there considering the series made an unprecedented amount of money from toys and promotional materials.

David Prowse was the physical actor of Darth Vader but Lucas had James Earl Jones and his sultry, dulcet tones sub over all the dialogue. Prowse had no idea and wasn’t told. He found out at the premiere. Lucas was kind of a dick.

Darth Vader is only on screen for about 12 minutes.

George Lucas convinced Carrie Fisher not to wear a bra for the entire series because he said there was no underwear in space. He later tried to explain this by saying, “In space you get weightless, and so your flesh expands. What? But your bra doesn't, so you get strangled by your bra.” See previous statement about George Lucas.